Fiumicino looking for back to back wins

December 14, 2012 by Mark Mazzaglia
Home > Fiumicino looking for back to back wins

Rejuvenated stayer Fiumicino is looking for back to back wins at Rosehill tomorrow after breaking a three and a half year winning drought at Warwick Farm two weeks ago. 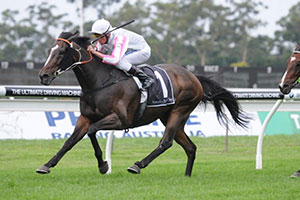 Winning jockey Nash Rawiller feels that the nine year old has enough gas left in the tank to continue his new found form after an all the way win in the Listed $100,000 ATC Cup (2200m).

“At Warwick Farm he was able to carry the big weight and fight them all off and the main thing to come out of it was that he felt terrific in his action,” Rawiller said.

“Obviously he seems to be racing in great heart at the moment.”

Before his Warwick Farm win, Fiumicino was last in the winner’s stall back in April 2009 when he took out the Group 1 $2.25m The BMW (2400m) at Rosehill and Rawiller said that the veteran galloper is ready to run another good race with no signs of any leg problems.

“He felt like he was just peaking and showed no signs of carrying anything wrong with him,” Rawiller said.

The Team Hawkes trained Group 1 winner has drawn near the outside again and Rawiller said that he would adopt the same front running tactics that carried him to victory at Warwick Farm, also from a wide gate.

“He drew the outside gate last start and was able to overcome that,” Rawiller said.

“We’ll just roll forward again. It looks a good race for him and 2400m will be no problems.”

Fiumicino will be facing virtually the same field he beat last start and Michael Hawkes is expecting another bold showing saying that nine year old has thrived since his win two weeks ago.

“It’s amazing what a win does. It just gives them so much more confidence,” Hawkes said.

“As long as he puts in a run like he did the other day he’ll be hard to beat again.”

Leading trainer Chris Waller thinks the best chance that Moriarty has of turning the tables on Fiumicino is if the race develops into a good staying test after his former English galloper finished third to Hawkes’ rejuvenated stayer at Warwick Farm.

“If my theory is right I think he needs it to be a true staying test to win,” Waller said.

Jim Cassidy has taken over the reins on Cantonese from regular rider Jenny Duggan because the apprentice was unable to use her 3kg claim in the Listed race and trainer Bjorn Baker is happy to have secured the services of the top jockey.

“Jenny has ridden him exceptionally well so we may find or we may lose.

“But what it comes down to is Jenny can’t claim and Jimmy Cassidy can ride him at the weight and he’s a champion rider.”

Cantonese has come up the $3.30 favourite in early markets with topweight Fiumicino at $4.20 and Moriarty the next best at $5.50.