Fiesta returned to the races with an impressive victory in the 2018 Silver Shadow Stakes at Royal Randwick this afternoon. 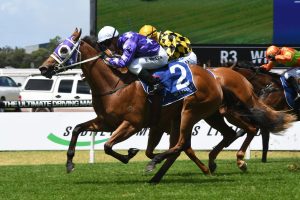 Fiesta returned to the races with a win in the Silver Shadow Stakes. Photo by: Steve Hart

The rail has been the place to be all day at Royal Randwick and Kerrin McEvoy was able to settle Fiesta just behind the leader Ready To Prophet in the early stages of the contest.

McEvoy took Fiesta off the rail to challenge Ready To Prophet at the top of the straight and it took her a while to wear down her rival, but she eventually fought her off and did enough to hold-off a fast-finishing Outback Barbie.

Outback Barbie got further back than expected and savaged the line to give punters that backed Fiesta a scare, while pre-race favourite Oohood got too far back and is clearly already looking for further.

Trainer Chris Waller was delighted to see Fiesta make a winning return to the races and he confirmed that she will continue to progress through the Princess Series; with her next race start set to take place in the Group 2 Furious Stakes (1200m) at Royal Randwick on September 1.

“She is a really good filly,” Waller said.

“We asked a bit of her as a two year old, which is obviously important in Sydney racing.

“It’s important to do well at the 2yo level but also to come back and do it at three. O

“Our team will take a lot of satisfaction in that.

“She will continue to progress through the Princess Series.

“That is the reason for taking the blinkers off.

“I do want to get her over a bit further.

“There are nice races to get her out to a mile eventually at her fourth up run without the blinkers.”

Kerrin McEvoy rode Fiesta as a two-year-old and he believes that she has made considerable improvement as a three-year-old.

“She is more developed and has strengthened up.

“Mentally she has grown up a bit too.

“Chris (Waller) and his team have been really happy with her.

“I’m not surprised she did that today because we had a nice soft draw.

“It was important to make use of that draw.

“I had first run on them and was full of running when I asked her.

“It was quite soft in the end.

“She’s in for a really good campaign so I’m pleased to win on her today.”