The Liam Howley-trained Homesman has won Saturday’s ‘win and you’re in’ race at Moonee Valley, claiming the Group 2 Feehan Stakes (1600m) to earn a spot in the $5 million Ladbrokes Cox Plate (2040m) on October 26.

Homesman, who finished runner-up in the same race last year, went on to win the Group 1 Underwood Stakes (1800m) three weeks later at Caulfield ahead of an encouraging runner-up placing in the Caulfield Cup two starts later.

The six-year-old by War Front opened as the $4.80 second-elect on Saturday behind race-favourite Fifty Stars. With jockey Ben Melham on board, the pair quickly moved up from a two-wide position on the final turn to go on and win by 2.5 lengths. 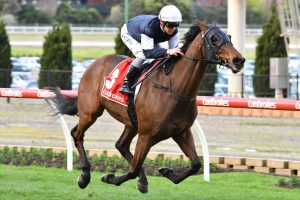 Homesman has firmed onto the second line of betting for the Ladbrokes Cox Plate on October 26 at Moonee Valley. Photo Credit: Ultimate Racing Photos.

Similar to last year, Howley plans to take the same path throughout the Spring – only this time he’ll make a slight detour towards the Cox Plate.

“He was terrific today; I can tell you there’s nothing more in racing that would mean more to us than getting our hands on a Cox Plate” Howley said following the win.

“We’ve tried many times and come up short, so he’s certainly heading the right way. Benny gave him a 10/10 ride, it was absolutely terrific. Obviously with the sticky draw he was a bit concerned with where he might end up, and we just left it to him and it all worked out terrifically.”

Homesman has now won five of his 13 career starts dating back to 2016, leaving Macedon Lodge with plenty of options looking ahead not only to the Cox Plate, but also the Caulfield and Melbourne Cup.

Howley admitted after the race the Cox Plate was always the target for Homesman this Spring as the stable looks to cash in on his versatile racing patterns.