Favourites continue to get beaten in Matriarch Stakes

November 10, 2012 by Mark Mazzaglia
Home > Favourites continue to get beaten in Matriarch Stakes

This year’s Melbourne Cup Carnival continued to prove costly for punters with another short priced favourite getting beaten in the Group 2 $300,000 Matriarch Stakes (2000m) at Flemington today. 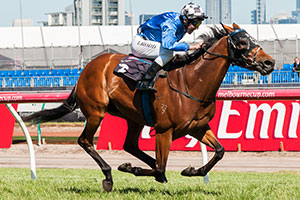 New Zealand mare Silent Achiever ($2 fav) was yet another favourite to struggle at Flemington and after settling in the second half of the field failed to reel in the placegetters and finished one and a half lengths behind the Mark Kavanagh trained Midnight Martini ($7).

While winning jockey Michael Rodd was sitting quiet on Midnight Martini just behind the leaders coming to the home turn, Hugh Bowman was easing out three deep on the favourite but was unable to make up any ground on the winner over the final 100m.

Rodd had the luxury of waiting until the 250m before he made a move on the Street Cry mare and once he let her go there was no doubt in the result.

“She’s just an honest mare this time in. All the credit goes to Kav and his staff here at Flemington and also Adelaide.” Rodd said.

“We’ve had a bit of a dry run but what runners we’ve turned out over this carnival they’ve either won or placed. You can’t ask for much more than that.”

“She’s just super honest, we had a really soft run, I didn’t have to move on her until the 250m and that’s what made the difference in a race like that. The favourite was out the back and I was up on the speed.”

Kavanagh wasn’t over confident going into the race but was giving Midnight Martini some chance only because the favourites continued to go down.

“Only because all the favourites have been tipping over this carnival so I thought at least we’ve got a hope,” Kavanagh said.

“He knows her backwards and was able to roll forward and put her to sleep on the fence which was always the plan. It was a bit of a tricky draw. She’s a good mare and she’s on the way up and certainly we are more than happy with today’s effort.”

“It’s pretty exciting to have a winner over the carnival.”

With only one favourite winning on Emirates Stakes day it was no surprise to see the New Zealand Derby winner, Silent Achiever struggling to figure in the finish after Patinack Farm Classic favourite Sea Siren and Emirates Stakes favourite Fawkner both finishing second earlier in the day.