Co-trainers Gai Waterhouse and Adrian Bott’s star colt Farnan has plenty of early speed to overcome a wide barrier in the Group 1 $3.5 Longines Golden Slipper at Rosehill on Saturday. 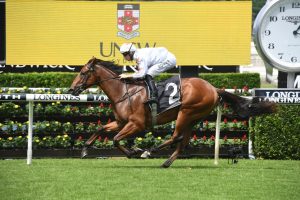 Farnan will have to overcome a wide barrier draw to win the 2020 Golden Slipper. Photo By: Steve Hart

Farnan drew barrier 14 in the final Golden Slipper field of sixteen plus four emergencies with two of the reserves drawing inside of the Waterhouse and Bott trained colt who is likely to jump from gate 12.

Farnan flew the gates when an all the way winner last start in the Group 2 $300,000 UNSW Todman Stakes (1200m) at Randwick on March 7 and Hugh Bowman no doubt will adopt the same tactics this Saturday.

The Not A Single Doubt colt completed his last serious workout in the lead up to the Golden Slipper on Saturday morning and co-trainer Adrian Bott said the work capped off a great preparation for Saturday’s major assignment.

“Farnan has had a great build up, he has been a dominant colt this campaign,” Bott told the Daly Telegraph.

“He had a nice hit-out Saturday morning and that was his main work going into the Golden Slipper. He’s as fit as we can get him, there is not much more we can do.”

The wide barrier has seen Farnan lose his spot at the top of the Golden Slipper betting and the colt is now the $5.50 second favourite at Ladbrokes.com.au behind the Blue Diamond Stakes winner Tagaloa at $5.

Tagaloa ran on from the back to finish second to Farnan in the Todman Stakes and will jump from gate six with Michael Walker in the saddle again.

On the third line of betting at $6.50 is the Anthony Freedman trained Hanseatic who drew barrier nine and will have the services of new jockey Kerrin McEvoy, replacing Tim Clark who was aboard the colt when he ran second to Tagaloa in the Group 1 $1.5m Neds Blue Diamond Stakes (1200m) at Caulfield on February 22.