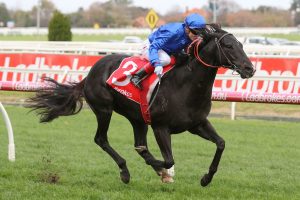 The five-year-old son of Commands has been with Purdy since the autumn having previously been trained in Melbourne and won under her training for the second time in the Eye Liner.

His first victory came in early April at his new home on the Gold Coast before bad luck and wide barriers hampered his Queensland Winter Racing Carnival.

His Ascot Handicap hoop Jag Guthmann-Chester came back aboard for the Eye Liner and, as instructed, rode the horse for luck from the wide barrier.

“That horse, he’s just a little gun. He’s just had no luck the whole carnival.

“He’s just been flying. When you look at his runs, you just can’t knock him.

“When the barriers come out, I just thought ‘not again!’

“I told Jag he’s just got to ride him for luck and hope for the best.

“The horse deserves it.”

Making up ground from the back, Bandipur ($12) got the gap on the straight and was able to burst through into the lead and hold off the fast-finishing Boomsara ($5.50) for Chris Munce for a three-quarter length victory.

In third adding further value to the Eye Liner Stakes trifecta was the Darryl Hansen-trained Monsieur Gustave ($19) who just edged out the up-in-grade I Dream Of Green ($18) for Stuart Kendrick.

Purdy confirmed Bandipur was now heading to the paddock for a rest before targeting the Magic Millions Carnival at the Gold Coast in January where they would need a Wild Card entry to make one of the day’s features.