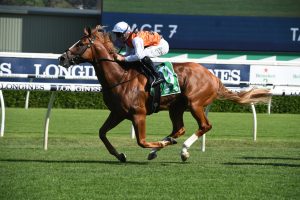 2020 Expressway Stakes winner Standout will be aimed at the Sydney Group 1 races over the autumn. Photo: Steve Hart.

First-up off a spell, the Exceed And Excel colt was ultra-impressive with his fourth career win from five starts at just his second preparation with a fresh win over the defending champion Alizee in the Expressway Stakes at Randwick.

Atoning for his last start second in the Group 2 Roman Consul Stakes (1200m) last October at the same track and distance, Standout showed he had matured over the break switching off well in the run for jockey Tommy Berry.

Berry had the horse settled fourth behind the leader Irithea, while James Cummings’ three-time Group 1 winner and last year’s Expressway Stakes winner Alizee was last with Hugh Bowman aboard.

Bowman left it too late making his move on the odds-on favourite who gave chase once on the straight but never looked like getting close to the flying three-year-old.

Berry called upon Standout after the home turn, the up-and-comer absolutely cruising down the outside to go past the front runners and win by one and a half lengths while White Moss rounded out the trifecta in third.

“Today was going to be, if he measured up, a preparation aiming towards the spring races at weight-for-age,” Ryan said.

“With fifty-five and a half kilos he’s carrying only about a tenth of his body weight.

“A race like the Canterbury Stakes could be on the agenda.

“The TJ (Smith Stakes) and those races we won with Melito and Trapeze Artist as three-year-olds.

“Certainly, the better sprinters are going to come back, these aren’t A-grade sprinters he’s beaten…but it’s only his fifth start.”