Three scratchings from this afternoon’s 2020 Expressway Stakes field at Royal Randwick has the defending champion Alizee facing off against just six rivals in her bid at back-to-back wins in the Group 2 feature. 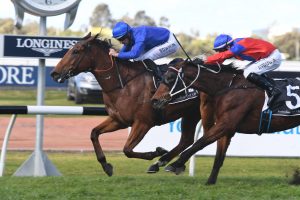 This season’s Group 2 $200,000 Expressway Stakes (1200m) and eight support races have all been moved from Rosehill Gardens to sister track Randwick due to the heat wave in Sydney.

The weight-for-age Expressway Stakes originally attracted ten final acceptors but a trio of withdrawals from the starting line-up has left a diminutive field.

Earlier in the week the Kris Lees-trained Special Reward (2) was scratched from the meeting’s ace race and the horse has subsequently also been taken out of the last at Randwick.

Trainer Chris Waller is left with just one chance at an Expressway Stakes win with his returning Epsom Handicap – The Golden Eagle double winner Kolding after stablemate Kubrick (4) was taken out.

Kubrick was also set to kick off his Sydney Autumn Racing Carnival in the event, the Shooting To Win colt not having raced since his $1 million Bondi Stakes (1600m) win at Randwick last October.

Kolding currently pays $3.70 in updated betting at Ladbrokes.com.au and is the market mover in gate seven with Glen Boss continuing associations with the Ocean Park four-year-old.

Sidestep filly Kiamichi was disappointing in her two spring assignments and was a late nomination to take on her stablemate Alizee in the Expressway Stakes before drawing the outside alley and subsequently coming out of the sprint showdown.

Trainer James Cummings and the Royal Blue army will instead save Kiamichi for a return in next Saturday’s Group 3 $16,000 Eskimo Prince Stakes (1200m) at Warwick Farm that the stable won two years back with Kementari (2018).

Standout faces an acid test this afternoon having won three of his four career start to date in easier company with his last start back in October producing a second to Cosmic Force in the Group 2 Roman Consul Stakes (1200m).

Current Expressway Stakes betting has the Exceed And Excel colt at $5 for the win with jockey Tommy Berry back in the saddle having ridden the chestnut for three wins on the trot last spring.

Alizee remains top of the Expressway Stakes odds at a short quote of $2.25 and firming as the daughter of Sepoy chases successive wins in the race for the first time since Court’s In Session (2005-06).

A three-time Group 1 winner, she was last seen running fourth to Nature Strip down the ‘Straight Six’ at Flemington in November’s Group 1 $2 million VRC Classic (1200m).

A first-up flyer she has won four of her five previous runs fresh and has been targeted especially for this making her a hard to beat favourite in gate six with Hugh Bowman in the saddle.