The Archie Alexander-trained Gamay jagged a big win at Caulfield on Saturday claiming the Group 3 Ethereal Stakes (2000m) at a handy price.

With an eye towards next month’s Group 1 Kennedy Oaks (2500m) at Flemington on November 7, the three-year-old filly by Pierro showed enormous courage over the final 400m after moving up to challenge Celestial Falls and race-favourite Vegas Jewel. From there, there was no stopping Gamay with jockey Declan Bates on board as the pair went on to win by a head.

The pace was on early in the race as Bates felt the pressure to respond. Gamay worked towards the leader at the turn in what turned out to be an extremely honest win in the famous Coolmore colours. 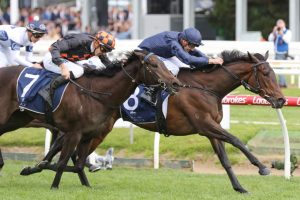 “He’s always been a really nice filly. I remember back in about February time she hadn’t even had a start and Arch said to me, ‘I reckon she’s an Oaks filly this’, so that’s the past she’s been in all the way along. Today’s a bit of a fork in the road though, we thought at Flemington she went super but just had no luck. We thought if she runs top four today, we should push on to the Oaks” Alexander’s stable representative Jeremy Rogers said.

Gamay has firmed from $15.00 into $7.00 with Ladbrokes on the back of Saturday’s run. The win was the three-year-old’s second from only five career starts, but also Bates’ first win on Caulfield Cup day.

“There was a bit of pressure early but she normally begins really well so you need to be in that forward position. I always traveled like the winner and she responded to the pressure” Bates said when asked on the run.

The winning hoop agreed that Gamay looks a serious Oaks contender and thinks his ride continues to show promising signs of improvement.

“I think for sure. Each race this prep she’s lifted, I galloped with her last week after her last win and I thought she improved again so I was quite confident here today. I think she can step out further today and improve again.”

Gamay now hopes to become only the second horse to complete the Ethereal-Kennedy Oaks double after Set Square did so for trainer Ciaron Maher back in 2014.

Vegas Jewel, who still hit the line strongly for an eye-catching second, has also firmed in Oaks betting from $12.00 into $7.00.