Epsom Handicap Next for Bill Ritchie Handicap Winner Comin’ Through

Comin’ Through has held on in the final strides of the race to win the Group 3 Bill Ritchie Handicap (1400m) at Royal Randwick this afternoon. 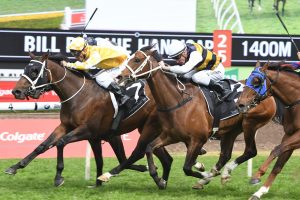 Comin’ Through received plenty of attention from punters in the lead-up to the Bill Ritchie Quality this afternoon and did his chances of justifying his favouritism no harm when jumping well and taking an ideal position in transit on the heels of early leader Burning Passion.

Enjoying a carefree run in transit, jockey Michael Walker moved the Fastnet Rock entire outside Burning Passion upon straightening and was greeted with a smart turn of foot as the horse pulled to the lead; hitting the line well to record his second black type win from Tom Melbourne and Burning Passion.

Walker delivered a perfectly-timed ride aboard Comin’ Through to win the Bill Richie Quality, but was quick to lay the praise on that talented gelding and Chris Waller’s placement.

“I am so thankful to Sir Owen Glenn for making me his rider, he’s a very good horse and he’s the reason I got down to 53kgs today,” Walker said after the race.

“He let the leader (Burning Passion) come back into it and he eye-balled him and he felt the horse on the outside, so he kicked again.

“But you know, hats off to Chris Waller. He’s just placed this horse so well.

“He’s had three weeks between runs and it’s probably why he won the race, he kept him so fresh.

“Bring on the Epsom!”

A half-brother to multiple Group 1 champion Criterion, Comin’ Through stormed home to the Australian racing scene through a short but impressive debut campaign last spring, capped by an impressive win in the Group 3 Carbine Club Stakes (1600m) on Derby Day.

Producing several good performances through this year’s Autumn Carnival without returning to winning form, the four-year-old comfortably defeated a handy field in the Broccolini BM90 (1400m) first-up this time on August 19th.

Comin’ Through has firmed onto the third line of 2017 Epsom Handicap betting markets at Ladbrokes.com.au.