The gelding by Dundeel held on to win by a neck at the line with Tim Clark in the saddle after coming off the fence down the straight. A late challenge by Bottega on the outside made for an interesting finish, but punters were left smiling when the $17 pop held on to win. 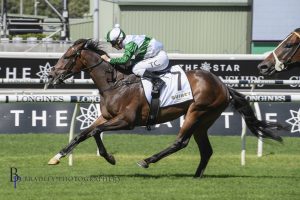 Entente was having his third run back after winning his maiden at Hawkesbury over 1800m a fortnight ago. Tim Clark has retained the ride throughout the prep and said after the race that this was by far his best performance.

“That is definitely the best he has raced. He has always shown good potential” Clark told Sky Racing.

“I think getting him gelded, he has really turned the corner this time in. That was a good performance. The penny has started to drop with him. Now that he is going about his races in the right manner, there is no reason why he can’t continue going right through his grades.”

The cancellation of the Winter Carnival has caused a change in plans for trainers all over the country. Entete’s co-trainer Adrian Bott said they plan to target the Group 3 Frank Packer Plate (2000m) at Randwick on April 18 now, but originally had plans to head to Queensland.

“I think a race like the Frank Packer Plate would be ideal. He’s a horse we originally had pencilled in for the Queensland Derby but obviously we’ve had to rethink and change those plans pretty quickly” Bott said.

“That’s the main reason he’s here today and it’s worked out well for him.”

Chris Waller’s three-year-old Snitzel colt Reloaded was the favourite on Saturday but struggled to make up ground over the final furlong sitting two off the rails. Grand Piano was the second-elect in the market and battled on well for fourth, while Power Scheme overcame a few troubles down the straight to run third.

Our Rokki went on to win the Toorak Handicap in 2017 after winning the Carbine, while the three winners since have failed to win another Group race. Even so, Clark went on to say that he thinks Entente should continue to improve throughout his prep.

“In an ideal world he would have been heading to the Queensland Derby, it would have been a perfect race for him. Obviously now that is not going to happen but there is the Frank Packer Plate in a couple of weeks over 2000m which probably now looks the ideal next target. Then we’ll see where Gai and Adrian want to go after that.”