Haut Brion Her has justified a big go in betting by comfortably winning the Group 2 Blazer Stakes (1400m) at Flemington this afternoon. 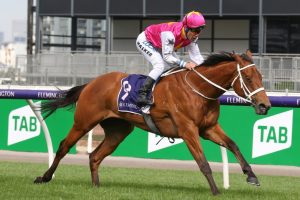 The four-year-old daughter of Zoustar simply does not know how to run a bad race and utilised her ideal draw of barrier 2 this afternoon when jumping well and taking a prominent position in running, alongside Savatiano.

Michael Walker allowed the mare to go through her gears and lead the Blazer Stakes field into the straight, and the pair were off and gone before any other horse had the opportunity to challenge.

Walker delivered a confident ride aboard Haut Brion Her and underlined the 2019 Empire Rose Stakes (1600m) on Derby Day as an ideal Group 1 target for her this time.

“The plan was in place to be one-two, but if I did lead and got a couple of easy sectionals, I’d put them to the sword early,” he said.

“She’s fit and just feels so amazing, she’s a beautiful big mare and on Tuesday morning after her work, I just couldn’t see her beaten today.

“It’s the first time I’ve ridden her on raceday but gee her turn of foot and down in the weights, she wouldn’t be out of place in something like that (Empire Rose Stakes).

The Blazer Stakes is the fourth race claimed by Haut Brion Her this time in, but a well deserved first in black type company.

Godolphin mare Pohutukawa mustered an eye-catching turn of foot when offered clear running and made up plenty of ground late to finish second, while Angelic Ruler turned in her second strong performance from as many starts this time to finish third.