The 2017 Emirates Stakes at Flemington next Saturday remains an option for Winx following her historic victory in the Ladbrokes Cox Plate last weekend. 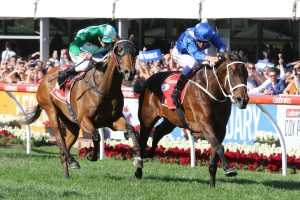 Winx was sent straight to the spelling paddock following her wins in the Ladbrokes Cox Plate in both 2015 and 2016, but trainer Chris Waller and connections have kept their options open with the record-breaking mare in 2017.

The daughter of Street Cry completed a light piece of trackwork at Flemington this morning and left Waller particularly impressed with the way that she has come through her tough win in the Ladbrokes Cox Plate.

Waller said that a decision about a potential start in the Emirates Stakes will not be made until he is able to talk to all the connections of Winx, but he couldn’t be happier with the condition of his star mare.

“I anticipated that I’d have it done by now but there’s been no discussion between myself, Hugh Bowman and the owners,” Waller told the media.

“All I can tell you is that she’s pulled up very well and that was always first and foremost to make sure that, as an animal, she’s coping well with her racing.

“She went into the race at 526kg and she’s come out of the race exactly the same weight, which is quite remarkable.

“They put quite a bit of effort into their races so for them to come out of a race the same weight, it firstly tells you that they were well and fit going into the race but most importantly that they’ve recovered so quickly.

“The feed bin has been left clean, she’s eating up well every night, she’s had a couple of quiet days at the beach and this morning she went out for a light jog on the track.”

The Emirates Stakes – formerly known as the Mackinnon Stakes – is one of the few Group 1 races on the Australian Racing Calendar that is yet to be won by the Waller stable.