The 2017 Thousand Guineas field has been released and only eight fillies are set to contest the Group 1 event at Caulfield on Saturday. 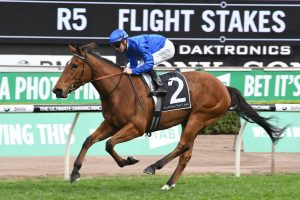 Alizee will start the 2017 Thousand Guineas as a clear favourite. Photo by: Steve Hart

Global Glamour completed the Flight Stakes/Thousand Guineas double 12 months ago and Alizee will have the opportunity to replicate that feat this weekend.

Alizee made a fair start to her 2017 Spring Racing Carnival campaign, but she stamped herself as one of the best fillies in the country with her impressive wins in both the Group 2 Tea Rose Stakes (1400m) at Royal Randwick on September 16 and the Group 1 Flight Stakes (1600m) a fortnight later.

Another horse that will take winning form into the 2017 Thousand Guineas is Matthew Ellerton and Simon Zahra-trained Booker.

The Fastnet Rock filly started her racing career with four straight wins and she savaged the line to only just miss in the Thousand Guineas Prelude.

The big talking point about the 2017 Thousand Guineas field is the absence of Ladbrokes Blue Diamond Stakes winner Catchy.

Co-trainer David Hayes has said throughout the 2017 Spring Racing Carnival that Catchy would take on the boys in the Ladbrokes Caulfield Guineas and she will do just that on Saturday.

One of the most surprising inclusions in the 2017 Thousand Guineas field is Darren Weir-trained Leather’N’Lace, who was beaten as a short-priced favourite in the Edward Manifold Stakes at Flemington last weekend.

Weir was very disappointed with the performance of Leather’N’Lace in the Edward Manifold Stakes, but he has elected to give her another opportunity in the Thousand Guineas this weekend.

The 2017 Thousand Guineas field is rounded out by Lindsay Park-trained Pure Scot, the promising Aloisia, Tony McEvoy-trained Mintha and the lightly-raced She’s So High.