Security at Brisbane’s Eagle Farm Racecourse has been beefed up after a suspected break-in to trainer Barry Baldwin’s stables. 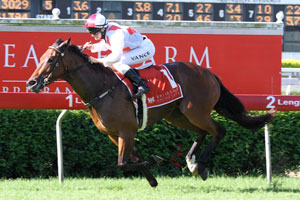 In a statement on his website, Baldwin said someone had entered the stables outside of normal hours and administered her with a mystery substance.

“We believe this happened sometime before Monday, outside the hours when the stables are attended,” Baldwin said.

“Once I found the marks on Saraji’s neck, I immediately alerted Racing Queensland stewards.

“Soon after, the police and the RSPCA attended the stables to do their own inspections.”

The incident comes on the eve of the biggest day of the year in Queensland racing with the $1 million Stradbroke Handicap set to take place this Saturday.

Racing Queensland stewards have acted swiftly and there are now increased security patrols at night ahead of the showcase day that includes three Group 1 events.

Saraji was not scheduled to race in Saturday’s action but was nominated to run at Doomben on Monday.

That will not happen as the three-year-old will be unable to race until the results of a a swab sample ordered by Racing Queensland become known next week.

Baldwin said he was shocked by the incident but is confident the horse will suffer no long-term effects after conducting his own tests.

“I have no clue as to why someone would do this,” he said.

“We enjoy a good reputation as a stable and have a long and proud history of keeping our horses safe.

“We have done tests on Saraji for toxins and they have come back negative. She appears to be well, despite having a sore neck, and we’re keeping her in work.”

Saraji’s box is believed to be the only one accessed and no other horses show signs of ill-health following the incident.