Trainer Tony McEvoy is confident the stable’s The Goodwood winner Despatch has what it takes to stretch out to the 1400m of Saturday’s Group 1 $1.5 million Stradbroke Handicap in Brisbane. 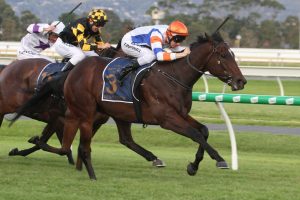 The Goodwood winner Despatch will race over 1400m for the first time in Saturday’s 2019 Stradbroke Handicap. Photo: Jenny Barnes.

McEvoy has confirmed the team will pay final Stradbroke Handicap acceptances this week for three runners.

Flying four-year-old Despatch is to be joined by the out-of-form duo Manuel and Dollar For Dollar.

That elite level win at Morphettville was the sprinter’s fourth on the trot.

Success on Saturday will see him not only stretch the winning streak to five straight, but will also make Despatch just the second horse to do The Goodwood – Stradbroke Handicap double.

The first was Santa Ana Lane (2018) only last year, who further franked the form in both his subsequent spring and autumn campaigns with Group 1 wins in the VRC Classic (Flemington) and TJ Smith Stakes (Randwick).

Undefeated in Queensland, Kiwi raider The Bostonian may have the best lead-up campaign of the runners but the horse must carry the 57kg topweight in the Stradbroke on Saturday.

Despatch looks well-weighted with 54.5kg and is equal first on the Stradbroke Handicap ballot with both The Bostonian and the weekend’s upset Moreton Cup winning filly Pretty In Pink who will get into the feature with just 49.5kg.

As yet untested over further than 1200m, McEvoy remains confident Despatch has the class and ability to give the Stradbroke distance a good go.

“He deserves his chance at this race after winning the Goodwood. We think he’s up to giving it a crack,” he told The Herald Sun.

Barend Vorster is engaged to ride Despatch in the Stradbroke Handicap field, while stablemates Manuel and Dollar For Dollar will be partnered by Luke Currie and Jamie Kah respectively.

Manuel and Dollar For Dollar are both installed at $26 in futures Stradbroke Handicap betting after disappointing performances last time out.

He has won a subsequent Gold Coast trial over 1000m and will benefit from the handicap conditions on Saturday dropping from 58.5kg last start to 55kg as he chases his first victory since the Group 1 CF Orr Stakes (1400m) at Caulfield back in February.

“He performed under par last start and we were tossing up whether to go on. Dad watched over him for a few days and there seemed to be nothing wrong with him,” McEvoy explained.

“He was fresh and well and moving nicely so he took him to the trials at the Gold Coast last Monday and he went really well.

“I don’t know what was in it but he gave them a six-lengths’ start and rounded them up and won well.”

Dollar For Dollar was also a dead-last runner last time out behind The Bostonian when the six-year-old found the Good (3) Eagle Farm track too firm on May 25 in the Group 1 $700,000 Kingsford-Smith Cup (1300m) following his Doomben 10,000 third.

“All horses have an off day but if you go through his record, he never has an off day.

“We couldn’t come up with a reason other than the track was very firm and with him being an older gelding he might have protected himself.”