Punters were saved from a dead heat at Randwick on Saturday as the Group 3 Show County Quality came down to the wire.

Godolphin favourite Deprive, trained by James Cummings, won the race by no more than a hair as second placegetter Trope lunged towards the line to force an interesting photo finish.

It was a thrilling end to the race with both horses hitting the line strongly. Deprive, who drew the fence, struggled out of the gates, but found plenty of room late to challenge the leading Catesby, who fought on well.

“It was a nailbiter. Trope is a pretty capable galloper with an impossible finish. We’re honoured and a little flattered to have beaten him” Cummings said after the race.

“Deprive was a bit fresh and wanted to get up on his hind legs momentarily. Good to get that run out of the way.” 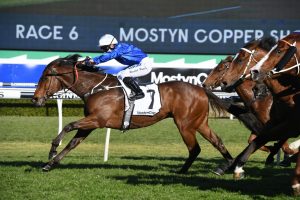 Trope, who opened as the favourite, wound up down the straight with Tommy Berry in the saddle, fresh from a win in the race prior aboard Libertini. With the rail in four metres, the wait to determine a winner lasted over two minutes.

“Big run, winkers were good for him today, they didn’t go as quick as I thought they would, so he did travel a bit too well for me, he’s going great. Super effort” commented Berry after the race.

Both horses were first up at Randwick on Saturday, and both could be headed towards bigger and better things in the Spring.

Deprive has now won his last five starts, adding to Godolphin’s long list of talented sprinters. Trope, meanwhile, should feature in a Group 1 soon for the Hawkes stable.

Last year’s Show County winner Le Romain has failed to win a race since but did place second in the Group 1 George Main Stakes (1600m) at Randwick a month later.