There wasn’t a great deal of support for Daysee Doom as the money came for Breeders Classic winner Prompt Response and the Gai Waterhouse-trained galloper did get a lovely trail into the race. 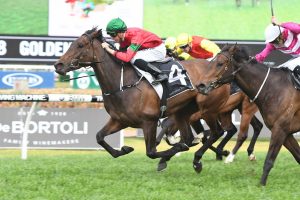 Daysee Doom returned to the races with a win in the 2018 Coolmore Classic. Photo by: Steve Hart

Prompt Response didn’t show the turn-of-foot that she did last start and it was Girl Sunday that proved tough to catch, but Daysee Doom showed an impressive will to win in the final 100 metres to get her nose in front in the shadows of the post.

Trainer Ron Quinton was delighted to see Daysee Doom make a winning return to the races and he confirmed that she will chase a maiden Group 1 victory in the 2018 Coolmore Classic at Rosehill Gardens on March 10.

“Both Daysee Doom and Dixie Blossoms will end up in the Coolmore,” Quinton said.

“I can’t keep them separated for too long.”

Andrew Adkins has formed an excellent relationship with Daysee Doom and he has now recorded six wins on the Domesday mare following her win in the Millie Fox Stakes.

Adkins paid credit to the toughness that Daysee Doom showed in the Millie Fox Stakes and he was thrilled to have claimed another black-type win with his favourite mare.

“It was a pretty easy tempo early, but I was happy when they started to turn the speed up,” Adkins said.

“I wasn’t sure how much she would have to offer because she was first-up, but she is just so tough.

Girl Sunday was able to tough it out to finish second in the Millie Fox Stakes, while Foxplay found the line nicely for third in a performance that suggests that she is in for a big Autumn campaign.