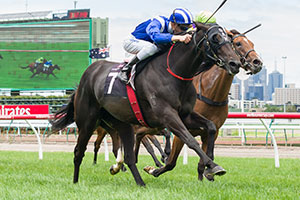 Hayes made the decision to travel to Gosford after Mabsam scored an impressive win with apprentice Chad Schofield over 1620m against fillies and mares in a 0-89 handicap at Flemington on December 15.

The Lindsay Park trainer thought it was a good opportunity to chase some black type and picked out the race at Gosford.

“It’s all about Black Type with her. She’s been racing really well, through the Spring and now she’s really hit form,” Hayes said.

“No, we don’t go there very often but this is an ideal race for her over a mile which is perfect, and like I say, it’s all about getting some Black Type on her.”

Mabsam has already some black type beside her name with a third to Star Of Giselle in the Listed $120,000 Race-Tech Classic (1600m) at Caulfield on October 17 before finishing second to Kasane over 1700m against the mares at Flemington on November 6.

Nathan Berry takes over from Schofield and looks to be well placed even though she is coming up against several last starts winners.

Chris Waller’s Pipette is going for a hat trick after two city wins as is the Peter Snowden trained Babel who has two Warwick Farm restricted grade wins behind her.

The Listed $125,000 Gosford Quarries Gosford Gold Cup (2100m) has attracted a strong field of middle distance gallopers including the Gerald Ryan trained Ironstein who performed  creditably during the Spring Carnival with several placings at Group level.

“I gave him three weeks off after Melbourne, he’s had a trial over 1200 metres and straight into Gosford, He’s fit and well and he’s got a solid campaign ahead of him again,” Ryan said.

The Zabeel seven year old has had a freshened up since finishing seventh to Ibicenco and Reuben Percival in the Listed $150,000 Sportingbet Sandown Cup (3200m) at Sandown on November 17 after running second to Puissance De Lune in the Group 3 $250,000 Queen Elizabeth Stakes (2600m) at Flemington on November 10.

And the Gai Waterhouse trained Reuben Percival has also had a freshened up after his Sandown Cup third while the rejuvenated Group 1 winner Fiumicino gets a chance to add another win against his name.