Dame Giselle is on target to complete The Princess Series undefeated with her win in the Group 2 $200,000 Darley Tea Rose Stakes (1400m) at Randwick today. 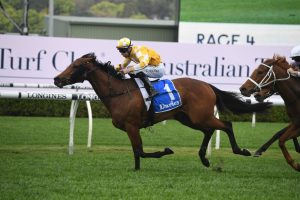 Dame Giselle will head to the fourth leg of The Princess Series in the Group 1 $500,000 Darley Flight Stakes (1600m) at Randwick on October 3 after winning the first three legs.

The Peter and Paul Snowden trained filly has firmed in the betting for the Flight Stakes at Ladbrokes.com.au from $6 to $4 and is the second pick behind the Chris Waller trained Hungry Heart.

Hungry Heart has finished second to Dame Giselle in the Furious Stakes and today in the Tea Rose Stakes and still heads the betting for the Flight Stakes at $2.40.

“I stood here two weeks ago and said it was pretty to watch. Today was even better,” co-trainer Paul Snowden said.

“Great ride by Tommy, afforded a good draw and she lobbed into a lovely spot. Just the turn of foot that she possesses when needed to, we were pretty confident that seven furlongs wasn’t going to be a problem today and she has won accordingly.”

“When you have a good filly this is what you aim at. We are lucky enough to win the first three legs of it. It’s been great. The biggest thing for her was striking those wet tracks at the end of her preparation after the Slipper and she is not effective on those 6s and 7s. Much better on top of the ground. Praying for a little bit more dry weather in Sydney.”

Tommy Berry put Dame Giselle ($2.70) in a beautiful position in the run, in third and fourth spot behind the leaders, before easing her into the clear at the top of the rise to give her an uninterrupted run to the line.

Hungry Heart’s ($2.45 favourite) run was full of merit and after getting slightly held up for a run in the straight, worked hard to the line to finish a half a length second.

The Gai Waterhouse and Adrian Bott trained Vangelic ($18) set the pace and battled on for third ahead of Hugh Bowman’s mount Montefilla ($8).

Berry has no concerns about Dame Giselle stretching out to the 1600m of the Flight Stakes but would like the filly to be able to get some cover in the early and middle stages.

“She was great today, she was strong at the end there, she just switches off when she gets to the front, a bit like last start,” Berry said.

“She was a little bit fired up when they weren’t going all that quick, but it was very important to get cover on her, because once I did, she switched off fine.”

“I think if she gets cover she’ll be fine or even if she lobs outside the lead. Because in the first 150m, I lobbed outside Gai’s and she was so relaxed for me and it wasn’t until Brenton (Avdulla) came up around her that she fired up.”