A terrific ride from Hugh Bowman saw Dalasan salute as the favourite in the Group 3 Carbine Club Stakes (1600m) at Flemington on Saturday.

Surrounded by a strong field of proven three-year-olds, patience from the champion hoop proved the difference as the pair pounced at the 150m mark to outlast the challenging Brandenburg over the final 100m.

Dalasan was installed as a $3.50 pop with Ladbrokes prior to the jump after showing plenty of promise when fifth in the Group 1 Caulfield Guineas (1600m) three weeks ago. The colt by Irish miler Dalakhani nearly ran out of gas with 50m to go but had just enough left to lunge at the line for a memorable win.

“He’s a very smart horse and a little bit disappointing maybe in a Caulfield Guineas but he had no luck. Beautiful ride today, gave him a lot of luck throughout and that’s what he’s on there for” winning trainer Leon Macdonald said of Bowman’s ride. 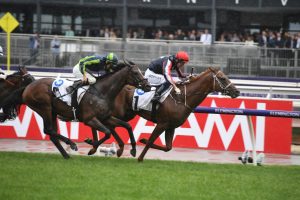 Bowman settled back in the run as Hilo dictated from the front. There was plenty of work to do with Groundswell finding position on the rails and Brandenburg out wide, but Bowman always knew his ride could finish strongly with the blinkers off.

“He settled a lot better. I had a better draw and I think the horse was probably more suited at Flemington than Caulfield, but he was a beaten favourite at Caulfield and he came here with full expectations” Bowman said after the race.

Bowman went on to say that he thought the decision to race with the blinkers on in the Guineas cost him a place. Saturday’s win earned connections a $1 million bonus though, so Bowman was happy to pay credit to the trainers for their quick decision making.

“We were all a little bit deflated after the Guineas and the blinkers went on at the race, and probably went against him. Full credit to the team for going back and preparing for this race.”

Dalasan has now won five from eight starts, three of which came this prep. Macdonald wasted no time making his intentions clear after the race stating that the horse will head back to the paddock ahead of a potential run in the $1 million Australian Guineas (1600m) next March.

“No further than a mile. Maybe the Australian Guineas” Macdonald said briefly.

There were plenty of eye-catchers worth following to come out of Saturday’s race. Brandenburg was huge from the wide draw running a strong second, while Groundswell saw out the trip perfectly for this third placing in a row.