The spring’s Cox Plate hero Sir Dragonet is out to return to winning form when jumping favourite in the Group 1 $1.5 million Tancred Stakes (2400m) this Saturday at Rosehill Gardens. 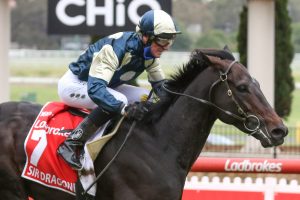 The Irish-bred import was the star of last October’s Group 1 $5 million Ladbrokes Cox Plate (2040m) saluting in impressive fashion with Glen Boss aboard.

Boss has partnered the Camelot entire for three of his subsequent four runs and is back aboard the five-year-old fourth-up and full of confidence.

Following a credible Melbourne Cup sixth over the two-miles to see out his spring campaign, Sir Dragonet returned this February and was unplaced in both the Group 1 CF Orr Stakes and $5 million The All-Star Mile.

He looked better with Boss aboard last weekend at the Rosehill track when fourth, 2.3 lengths off the brilliant Verry Elleegant in the Group 1 Ranvet Stakes (2000m) and is now on the quick back-up into the Tancred.

Stepping-up to the mile and a half at this stage of his prep looks to suit with the galloper boasting winning form up to 2505m and the bookies are taking no chances.

Sir Dragonet sits top of the latest Tancred Stakes betting markets at Ladbrokes.com.au paying $5 and firming to return to winning form drawn the inside alley in a 14-starter field.

Dual Tancred Stakes winning hoop Boss rode back-to-back champs in Makybe Diva (2005) and Eremein (2006) when the event was run as The BMW and believes he’s on the right horse to make it a hat-trick this autumn.

“It was unlike him,” Boss said of Sir Dragonet’s late flatline in the Ranvet when speaking to The Sydney Morning Herald this week.

“He was surging and we were chasing two really good horses and I thought we are going to get close to them, then he levelled out about 150m out and just slogged to the line.

“It was really like he needed that run. When I came back, I looked at [trainer] Ciaron [Maher] and he was thinking the same thing.

“I have been talking to the stable and they say he hasn’t left an oat this week, which shows he is in great nick.

“It is not a vintage Tancred and if he runs up to the rating, he is capable of, I don’t think there is a horse in the race that can match him.

“He is still a fairly inexperienced horse. Even though he has won a Cox Plate, he has only had 14 starts.

“He has the ability to really surge and I think if he does that on Saturday, he is the one to beat.”

The Jamie Richards-trained daughter of Commands may have 14 Group 1 wins on the board, but just one of those (2019 Empire Rose Stakes) has been in Australia.

She is also stepping-up to the mile and a half for the first time in the Tancred Stakes and so needs to answer a few questions if she is to salute as the $6.50 second elect from barrier 12 with three-time winning hoop James McDonald in the saddle.

The Tancred Stakes is scheduled to run as Rosehill Race 7 at 4:35pm (AEDT) on Saturday.