Undefeated filly Lady Horseowner will be included in the field for the Group 1 $1.5m Ladbrokes Blue Diamond Stakes (1200m) when final acceptances are taken on Tuesday after her connections paid the $55,000 late entry fee. 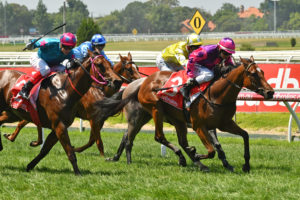 Trainer Greg Eurell said that Lady Horseowner had come through her win in the Group 3 $150,000 Ladbrokes Blue Diamond Preview (1000m) for the fillies at Caulfield on January 27 in great shape and has earned her place in Saturday’s Group 1 for the two year olds at Caulfield again.

“She just had a quiet week after that win in the Preview.

“That was a good opportunity to just let her do what she does.

“Everything’s gone smoothly – we haven’t had one single problem with her.”

“She deserves her opportunity and I think 1200 metres will suit her down to the ground.”

“It’s a big exercise, especially when you’re up against the colts, but she can only do what she’s been doing.”

“One thing is for sure, we know she’ll be honest and give it her best shot and she leads into it without any issues at all.”

The latest betting for the Ladbrokes Blue Diamond Stakes at Ladbrokes.com.au has Lady Horseowner as one of the outsiders of the field at $21 while the Tony McEvoy trained Kinky Boom and Plague Stone from the James Cummings stable share favouritism at $7 in a wide betting market.