August 24, 2019 by Ryan Cook
Home > Up and Coming Winner True Detective Looks Ahead to Golden Rose After Protest Win

The Chris Waller trained True Detective claimed a controversial Group 3 Up and Coming Stakes (1300m) win at Randwick on Saturday, moving into the Golden Rose conversation after winning a protest over second placegetter Superium.

Punters who got on board the favourite were left cheering as stewards ruled Superium shifted out in front of True Detective’s path down the straight. The pair engaged in a thrilling dash to the finish over the final furlong, one Superium trainer Joseph Pride can take plenty away from.

The threat of a protest put a dampener on what looked to be a fair win by Superium, but despite the result, jockey Glen Boss still felt as though his ride had taken a huge step forward.

“He’s taken the necessary steps from his first up run, his appearance in the enclosure, he just looked a different horse.” 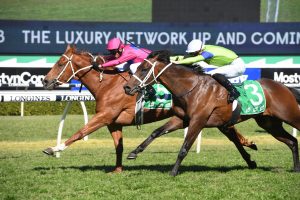 Superium’s standout performance comes on the heels of a fourth placing at Rosehill a fortnight ago after winning back-to-back starts at Bathurst and Wellington in the Autumn.

Pride knew instantly he had uncovered a promising sprinter and will now look ahead to the Group 1 feature race at Rosehill on September 28.

For True Detective, it looked to be a third consecutive runner up placing, but instead, the colt by Shamus Award has firmed from $51 into $26 with Ladbrokes ahead of the Golden Rose.

Despite the win, only two previous Up and Coming winners have gone on to claim the Golden Rose Stakes, with the most recent being Manawanui in 2011.

Last year’s Up and Coming winner Master Ash chose to skip the Golden Rose entirely, while it’s also worth noting five of the last seven winners have failed to win another race entirely.

Yes Yes Yes and Bivouac remain the only two single-digit chances in the Golden Rose market.

Pride’s little-known three-year-old Superium opened at $101 to win the Golden Rose but has since firmed into $26 with after a very tough result.