The 2017 Ladbrokes Caulfield Guineas results will be updated all afternoon long at horseracing.com.au and there are few better race meetings on the Australian racing calendar! 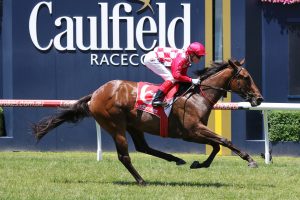 Catchy will take on the boys in the 2017 Ladbrokes Caulfield Guineas. Photo by: Ultimate Racing Photos

The Ladbrokes Caulfield Guineas is the highlight and it is set to be one of the most open editions of the race in recent history – with Catchy, Royal Symphony and Kementari locked in a three-way battle for favouritism.

Alizee will start the 2017 Thousand Guineas as a clear favourite, while there isn’t much between Bonneval and Hartnell in betting for the 2017 Ladbrokes Stakes!

The Toorak Handicap is the final race on the Ladbrokes Caulfield Guineas Day card and you can make a case for just about every horse in the field!

We will be updating the results for Ladbrokes Caulfield Guineas Day as well as The Everest all afternoon long, so don’t miss out on any of the action with horseracing.com.au!

Qafila made an impressive start to her racing career in the Debutant Stakes. Photo by: Ultimate Racing Photos

Qafila finished over the top of Sacred Sword to win the Debutant Stakes at Caulfield this afternoon.

Qafila was slightly slow out of the gates and Damien Oliver was at her early, but she was eventually able to make up ground on the rail to settle in a midfield position.

Oliver got her off the rail at the top of the straight and it took her a while to wind up before she knuckled down to find the line strongly in the final stages.

Lindsay Park look set to have another big season with their two-year-olds – Qafila beat Maribyrnong Trial Stakes winner Nomothaj in a barrier trial before their racing debuts.

Invincible Star led from start to finish to record an impressive win in the Thoroughbred Club Stakes at Caulfield this afternoon.

Stephen Baster got her across from the wide barrier draw very quickly and he was able to settle Invincible Star in a lovely rhythm.

Invincible Star responded well when asked for an extra effort and she quickly put a gap on her rivals before cruising to a comfortable Thoroughbred Club Stakes win.

Cool Passion found the line strongly to record a narrow win in an interesting edition of the Cape Grim Beef Steakes.

It looked as though Cool Passion would be blocked for a run at the top of the straight in the Cape Grim Beef Steakes, but a run opened at the perfect time and she was good enough to take advantage.

Trainer Tony McEvoy admitted that he is still learning about his new stable acquisition and he was delighted to see her win after having two luckless runs in her two race starts this campaign.

Lord Fandango stamped himself as a Caulfield Cup contender with his win in the Ladbrokes Herbert Power Stakes. Photo by: Ultimate Racing Photos

Aloft took up the running from Kidmenever in the early stages of the race and they ensured that the race was run at a very genuine tempo.

Both those horses were spent by the time they got to the straight and it was left to Lord Fandango to record the biggest victory of his racing career to date.

Trainer Archie Alexander confirmed that Lord Fandango will press on to the Group 1 Caulfield Cup (2400m) next weekend.

Fast ‘N’ Rocking returned to winning form with a narrow win over Religify in the Weekend Hussler Stakes at Caulfield this afternoon.

Religify took up the running in the early stages of the Weekend Hussler Stakes and Fast ‘N’ Rocking looked as though he would go right past him at the top of the straight, but the Chris Waller-trained gelding refused to give him.

Fast ‘N’ Rocking was eventually able to get his nose in front in the shadows of the post to claim his first victory since he won the 2015 edition of the Caulfield Village.

Aloisia upstaged Shoals and Alizee to record an upset win in the Thousand Guineas at Caulfield this afternoon.

Shoals hit the front at the top of the straight and Alizee looked as the only real danger on the outside, but Luke Nolen followed Shoals through on the rail and timed his run to perfection.

Alizee made up decent ground late, but she was unable to pick Aloisia and she claimed a Group 1 win in just her sixth race start.

Gailo Chop led from start to finish to record a tough win in the 2017 Ladbrokes Stakes at Caulfield this afternoon.

Jockey Mark Zahra went straight to the front on Gailo Chop in the early stages of the race and he kicked away from his rivals at the top of the straight.

Mighty Boss stormed home in the final stages to record a huge upset in the 2017 Ladbrokes Caulfield Guineas this afternoon.

Kementari and Catchy both finished strongly and looked as though they would fight out the finish, but Mighty Boss snuck up on the inside to claim victory at massive odds.

Michael Walker produced a truly outstanding ride and he was quick to pay credit to the training performance of Mick Price.

Tosen Stardom finally broke through for a maiden race win in Australia with an explosive performance in the 2017 Toorak Handicap at Caulfield this morning.

The Japanese galloper has been a frustrating horse for both punters and connections during his time in Australia, but he always promised to claim a big race win and he did exactly that in the Toorak Handicap.

Damian Lane timed his run to perfection on Tosen Stardom and he was able to finish over the top of his rivals late.

Super Cash returned to the races with a win in the Schillaci Stakes. Photo by: Ultimate Racing Photos

Super Cash finished over the top of Shiedel and Illustrious Lad to win the 2017 Schillaci Stakes at Caulfield this afternoon.

Illustrious Lad hit the front at the 150 metre mark and he looked like the winner, but Super Cash was able to wear him down in the shadows of the post to claim victory.

Katelyn Mallyon was delighted to record another win at Group level with Andrew Noblet and he believes Super Cash deserves a win at the highest level of racing.