Brilliant first up winner Brooklyn Hustle will be tested for the Group 1 Moir Stakes when she steps out second up in the Listed $140,000 Carlyon Stakes (1000m) at The Valley on August 22. 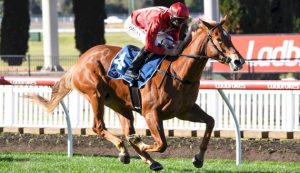 Brooklyn Hustle, above, will have her next start in the Carlyon Stakes at The Valley. (Image: Racing Photos/Pat Scala)

Another first class performance by the Rosemont Stud owned Brooklyn Hustle in three weeks time could she her step up to weight for age company in the Group 1 $1m Charter Keck Cramer Moir Stakes (1000m) at The Valley on September 25.

“She will head to the Carlyon Stakes in three weeks time. Back to The Valley, 1000m, Listed Race and hopefully she will get that Stakes victory that I think she so deserves,” Rosemont Stud Principal Anthony Mithen told racing.com’s After The Last.

“Certainly The Moir is on our radar. It is four weeks to the Moir, but we won’t plan any further ahead than that.”

“We really want to make her a Stakes winner. As a stud farm, it is about those Stakes fillies and Stakes performances for the horses that we breed at Rosemont. We need to tick that box first.”

“If she can’t get it done in the Carlyon we might need to duck and weave and have a look at other options. All going well it would be great to line up in a Moir or a Manikato at some stage. The Valley, she seems to love the Valley.”

The Jason Warren trained Brooklyn Hustle was spelled after finishing fifth in the Group 1 $1.5m Coolmore Stud Stakes (1200m) down the Flemington straight on the first day of the 2019 Melbourne Cup Carnival and resumed last Saturday with an explosive three and a half lengths win in a 1000m BenchMark 78 Handicap at The Valley.

“Her runs have been tremendous and even her last start before this on the weekend, her fifth in the Coolmore was full of merit and I think she is Stakes class at least and she gets that opportunity in three weeks time,” Mithen said.

“Jason wanted to use it as her second trial on Saturday which was a bit arrogant. But he pulled the right rein, he had her fresh and she just wanted to explode that last furlong.”