BRC bids to bring Black Caviar back to Brisbane

March 5, 2012 by
Home > BRC bids to bring Black Caviar back to Brisbane 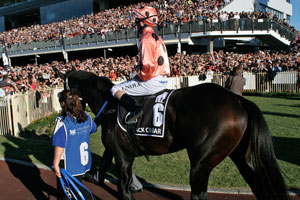 Black Caviar in front of the 20,000 strong crowd at Doomben last year

The Brisbane Racing Club in conjunction with Events Queensland and Brisbane Marketing have upped the anti in trying to get World Champion mare Black Caviar to attempt her record breaking 20th consecutive win at Doomben.

Ferguson said the organisation would do “what it takes” and pull out all stops to bring Black Caviar back to Brisbane.

“Black Caviar is Australia’s newest national treasure. We put in a lot of work last year to ensure that Black Caviar and her team had every need and wish met. It was very successful – and they were very happy – and we hope they want to enjoy our hospitality and racing again.”

A personal video invitation showcasing what Brisbane have to offer Black Caviar’s trainer Peter Moody and her owners was created by The Brisbane Racing Club, Events Queensland and Brisbane Marketing.

Moody recently confirmed he was tossing up between Brisbane and Adelaide for the champion mare to run her historic last race before she is flown to the UK to race at Royal Ascot.

It is hoped that the video also appeals to Mr Moody’s sentimental soft spot – a Queenslander himself – to celebrate a career highlight on the home turf where he started.

Mr Ferguson said “the BTC Cup was currently rated the third best sprint race in Australia and was well suited to Black Caviar. Last year more than 20,000 people turned out to Doomben Racecourse to witness Black Caviar storm home to win the BTC Cup. If she makes a return that number is likely to swell significantly.

He said the weekend of May 12 would be headlined by the BTC Cup but would also be the ultimate weekend of sport in Brisbane with the Brisbane Lions, Brisbane Broncos and the Queensland Reds all playing at home.

“Our aim is to make the weekend of May 12 this year one of the great weekends in Australian sport, with “Black Caviar versus the best” as the main event,” he said.

“What better weekend in Australian sport than for Black Caviar to go in to the history books?

“She is racing royalty – and will be treated accordingly. We have a proven track record in hosting her, the infrastructure for her special requirements, the amenities for her team and the enviable reputation for holding some of the finest racing in the country.”