John Sargent and Rachel King caused a memorable boilover at Rosehill on Saturday as three-year-old colt Brandenburg took out the Group 2 Hobartville Stakes.

The New Zealand colt went around as a 41-1 shot with Ladbrokes.com.au first up in his Rosehill debut. We last saw Brandenburg at the races back in November where he ran second behind Dalasan in the Carbine Club Stakes at Flemington, but the experienced galloper raced every bit like a favourite to beat home Reloaded and Microphone at the line. 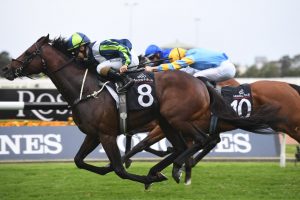 Brandenburg is now a $10.00 chance in both the Randwick and Rosehill Guineas. Photo Credit: Steve Hart.

King’s work on the soft track proved the difference as the pair found something extra over the final furlong. Brandenburg was caught three-wide on the final turn but switched into gear to beat home Microphone – who led from the barriers – and Reloaded, who stormed home late to grab second.

It’s fair to say bookmakers seriously overlooked Brandenburg considering his run of form dating back to his debut this time last year. In seven starts leading into Saturday, Brandenburg had finished no worse than third.

Brandenburg will likely step up to Group 1 level in a fortnights time in the Randwick Guineas before potentially lining up in the Rosehill Guineas on March 21.

Sargent’s hopeful has firmed from $17 into $10 ahead of both races.