Punters on board the Gerald Ryan-trained Colada were left cheering at Randwick on Saturday as the whopping 24-1 shot caused a boilover in the Group 2 Stan Fox Stakes (1500m).

The three-year-old gelding by Brazen Beau took up the lead early from barrier 3, setting a cracking pace that proved too much for the rest of the field.

Jockey Robbie Dolan chose to set the speed from the front as the pair led from Cock Match in the early goings. At the 400m mark, Colada still held a handy three-length lead over the rest of the field, while race-favourite Bottega was left with plenty of work to do from the rear. 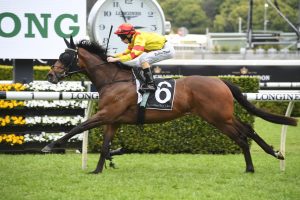 Colada caused a memorable upset at Randwick on Saturday on the way to next month’s inaugural Bondi Stakes. Photo Credit: Steve Hart.

Colada found something extra down the straight to win comfortably by five lengths. A stablemate of Bottega, the result marked Colada’s second win this campaign after claiming a maiden handicap at Canterbury over 1550m on September 11.

“It probably looked like he was going hard in front, a little bit keen, but he felt really relaxed down the back” Dolan said after the race.

“I just waited until we started to turn, I clicked him up and he picked up the whole way up the straight, it was great.”

While Colada set a cracking tempo up front, Bottega found no such luck well off the leader on the final turn. The Snitzel colt still ran on well for third, but punters aboard the $2.10 favourite were left wondering what went wrong.

“He really struggled to get into the competition for the majority of the race hence the position he was in the field. He was strong late so he might just still be very immature” beaten jockey Josh Parr said.

Trainer Gerald Ryan now has his sights set on the $1 million prizemoney in the Group 1 Bondi Stakes (1600m) at Royal Randwick.

Ryan said after the race that both horses will head that way on October 26.

Full Bondi Stakes odds can be viewed at Ladbrokes.com.au here.