Injured jockey Chris Symons is hoping to be fit to ride Ollivander in Saturday’s Group 1 $1.5m Ladbrokes Blue Diamond Stakes (1200m) at Caulfield after taking a tumble at Werribee trackwork this morning. 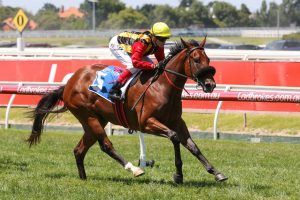 Symons has leg and arm injuries after he was dislodged in the straight from a Charge Forward colt but is confident none are serious enough to keep out of the saddle on Saturday.

“I just had a young horse ducking in on me halfway up the straight and I just went for a bit of a roll,” Symons told racing.com.

“It’s nothing life-threatening, but I’m going to get the doctor to have a look at me.

“I’ve got a sore left wrist and hand, right elbow’s got haematoma on it and my knees are a bit tender but other than that, I’m OK.

“I definitely haven’t broken anything and I’ve got a few days to get ready.”

Symons has been aboard the Mathew Ellerton and Simon Zahra trained Ollivander for his three race starts, all at Caulfield, and includes a debut win in an 1100m two year old Plate on December 16 followed by a second to Ladbrokes Blue Diamond Stakes fancy Long Leaf in the Listed $150,000 Ladbrokes Blue Diamond Preview for the colts and geldings over 1000m on January 27.

Ollivander then put in the worst run of his short career with a lacklustre tenth of thirteen behind Written By in the Group 3 $200,000 Ladbrokes Blue Diamond Prelude for the colts and geldings over 1100m.

That lastest run saw Ollivander’s Ladbrokes Blue Diamond Stakes price get pushed out to $31 with Ladbrokes.com.au who have Kinky Boom and Plague Stone sharing favouritism at $7 just ahead of Written By at $7.50.

The Tony McEvoy trained Kinky Boom put herself into Ladbrokes Blue Diamond Stakes contention with an impressive debut win in the $250,000 Inglis Premier (1200m) at Caulfield on February 3.

Plague Stone is yet to win from two race starts but lost no admires in coming from well back in the field to finish second to Written By in the Ladbrokes Blue Diamond Prelude.

The James Cummings trained Lonhro colt was also runner up at his other race start when second to Secret Lady in the $150,000 Golden Gift (1100m) at Rosehill on November 25.