The Hawkes team look to have a talented colt on their hands in the form of two-year-old Ole Kirk.

On the same day Black Caviar made her first appearance at the races in over seven years, Ole Kirk – a cousin to the mighty mare – won the Listed Talindert Stakes (1100m) at a very handy price.

The colt by Written Tycoon went around as a $34.00 pop with Ladbrokes on Saturday but raced every bit like a pro. Some mischievous signs in the mounting yard cast some doubt over his winning chances, but the cool hand of Dwayne Dunn in the saddle kept Ole Kirk composed. 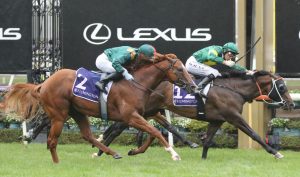 Ole Kirk holds nominations for next weeks Blue Diamond Stakes as well as the Golden Slipper and Inglis Sires’.

He’s got all the attributes. He can have a think now. He’s spent more time on two legs than four, but the talents always been there” Dunn said. “He’s like a 15-year-old kid who’s just worked out what girls are all about. He’s got a lot of energy which if we can use it in the right way, he’s going to be a really nice horse.”

Nitrous and Mildred, two of the favourites, went forward early and found themselves in a battle for the line. Ole Kirk looked trapped down the straight but quickly lengthened when a split opened up to go on and win by half a head.

The decision to race with the blinkers on also proved the difference, which Dunn credited the stable for making.

“He showed the talent and has just been a real lad. With the blinkers on, great move by Johnny and the boys, he’s changed a lot” Dunn went on to say.

“His trail down the straight was good the other day, came out a bit sticky today but I was happy to follow something and when he got to the front, he got a bit lost.”

Ole Kirk has firmed from $151 into $51 ahead of next weeks Group 1 Blue Diamond Stakes (1200m) at Caulfield, although Wayne Hawkes said after the race that the stable isn’t likely to feature.

“No real decision, everyone’s willing and hopeful and everything like that,” Hawkes said.

“He raced and won three minutes ago and to be fair we just wanted to see where he ran and take stock from there. There are a stack more races other than next week, so winners are grinners and we’ll take that one today.”