The Peter & Paul Snowden-trained favourite Fresh had to settle for second after being unable to run down the upset winner A Beautiful Night in Saturday’s Blue Diamond Fillies Preview at Caulfield. 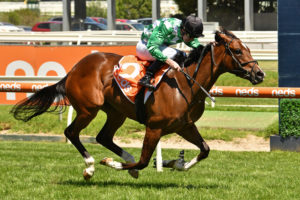 A Beautiful Night has firmed in 2020 Blue Diamond Stakes betting after winning the Preview for fillies. Photo: Ultimate Racing Photos.

Local training duo Ciaron Maher & David Eustace saddled-up two young fillies in the Group 3 over 1000m and both A Beautiful Night ($13) and third-placed Unstoppabelle ($21) finished in the money at double-figures.

Sandwiched between the stablemates was the beaten top fancy Fresh ($3.60) who did her best on the straight to run down the leader A Beautiful Night but just ran out of metres crossing a quarter-length back in the quinella.

Original plans were to have A Beautiful Night, last start Flemington winner down the straight over 1000m second-up on New Year’s Day, settled midfield before a swooping finish.

She was so quick out of the gates however that jockey John Allen took it upon himself to lead, letting his mount settle up front and lead the field around before giving a beautiful kick on the straight.

“She has done everything right this prep and she has been able to keep improving. Hopefully she can keep improving for another couple of weeks,” Allen said.

“She has a great attitude. She’s very honest, tries very hard and I’d imagine she’d get better the further out she goes.

“I thought the 1000m today would be a bit sharp for her today but she’s proved me wrong.”

She may have been an outside hope in betting, but co-trainer Eustace said the team went into the race with plenty of confidence.

“She’s still a bit tall and a bit narrow. There’s a lot to come.

“We were quite confident going into today. We thought she had been underestimated a little bit.”

A Beautiful Night won the Blue Diamond Preview for fillies in 57.27 seconds, a slightly quicker time than the gun Godolphin galloper Hanseatic (57.48) won the earlier edition for colts and geldings.

The latest all-in 2020 Blue Diamond Stakes odds at Ladbrokes.com.au on the February 22 feature have also firmed on A Beautiful Night in from $61 to $14, while the filly she defeated Fresh is the $10 third favourite.

Both the Preview winners are set to back-up in the Blue Diamond Prelude races over 1100m at Caulfield on February 8 as part of the C.F. Orr Stakes Day line-up.