Nine-year-old warhorse Black Heart Bart rewound the clock at Caulfield on Sunday to cause a memorable boilover in the Group 1 Underwood Stakes (1800m).

The Lindsey Smith-trained crowd favourite was a whopping 101-1 chance heading into the race after running third-last in the Group 1 Sir Rupert Clarke Stakes a week ago. What the bookies failed to factor in was Black Heart Bart’s enormous turn of foot in the late stages though, as the 2016 Underwood winner outlasted Homesman over the final furlong.

For those keeping track at home, it had been 946 days since Black Heart Bart last won a race and 673 since he last placed in the 2017 Railway Stakes.

An elated Brad Rawiller held back tears post-race, saying the result meant as much to him as a win on two of racings biggest days.

“I won a Golden Slipper and a Caulfield Cup and I never looked like getting teary and I’m nearly in tears, just amazing,” Rawiller said.

“We were going super well, his first-up two runs had been really solid. He hasn’t really travelled but today he just bounced, and obviously the tempo was going to be different at the 1800m.”

Retirement looked an option for Black Heart Bart just over two months ago, but after Sunday’s win, the chances of lining up in a Cox Plate (2040m) on October 26 could be a very real possibility.

“I always aimed him at the Cox Plate, so we’ll go there” Smith said jokingly on Sunday. 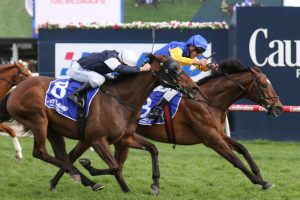 “No, I don’t know. We got through today and it’s good for the owner who copped a bit of flak and he got his reward today.”

Black Heart Bart isn’t nominated for the Cox Plate, but should Smith choose to head that way, he can pay a late entry fee of $130,000.

Meanwhile, second place-getter Homesman, who won the Underwood in 2018, also looks headed that way at $9.00 in Ladbrokes’ All-In market.

For Black Heart Bart, Sunday’s win marked his sixth Group 1 victory, and although Smith said after the race that he wasn’t altogether close to the horse, he now thinks he has a bit of a soft spot.

“He’s obviously a grand old horse. As I said earlier, I thought he was in a bit of trouble last start, but the jockey was very confident he’d come back and run a good race and he didn’t embarrass himself, so well done to the jockey.

“Before he trailed at Cranbourne I started to doubt, and then he trailed good. His first race was good I thought, his second race was plain. We thought to get him up to the 1800m so he’s not chasing all the time, so it was a good result” Smith said.