The 2018 Black Caviar Lightning Stakes Day results will be updated all afternoon at horseracing.com.au and we are set for another fascinating Group 1 event down the famous Flemington straight. 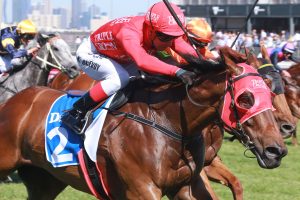 The Black Caviar Lightning Stakes is the only Group 1 event held over 1000 metres at Flemington and is always a battle between the quickest sprinters in the country.

It is The Everest winner Redzel that is dominant favourite in the 2018 Black Caviar Lightning Stakes betting market with Ladbrokes to record another Group 1 victory and there has been a huge amount of money for the talented galloper.

Terravista won the Black Caviar Lightning Stakes 12 months ago and he has been backed from $9.50 into $7.50 to go back-to-back, while Hey Doc has been $10 into $8 to score his third Group 1 victory.

The other key races on Black Caviar Lightning Stakes are The Vanity and the CS Hayes Stakes, which should both prove to be key form references for the 2018 Australian Guineas at Flemington in a fortnight.

Check horseracing.com.au all afternoon to keep up to date with all the 2018 Black Caviar Lightning Stakes Day results and enjoy a huge day of racing!

Prairie Fire justified a strong betting move to win the 2018 The Asian Executive Stakes at Flemington this afternoon.

Prairie Fire finished a credible third on debut in the Ladbrokes Chairman’s Stakes at Caulfield a fortnight ago and he franked the form coming out of that race with an impressive win.

The Snitzel colt showed a lovely turn-of-foot when asked for an extra effort and surprised trainer Mick Price with the professionalism that he showed in the win.

Prairie Fire will back-up in the 2018 Ladbrokes Blue Diamond Stakes next weekend.

The Mighty Jrod led from start to finish to win at Flemington this afternoon. Photo by: Ultimate Racing Photos

The Mighty Jrod led from start to finish to win the Japan Racing Association Handicap at Flemington this afternoon.

Chris Caserta took The Mighty Jrod straight to the front in the early stages of the race and that proved to be the winning move.

The Mighty Jrod had his rivals chasing at the top of the straight and he simply proved too tough for his rivals in the final stages.

Spanish Reef returned to the races with an impressive win in the 2018 TCL TV Handicap at Flemington this afternoon. Photo by: Ultimate Racing Photos

Spanish Reef returned to the races with an impressive win in the TCL TV Handicap at the Flemington this afternoon.

There was plenty of money for Spanish Reef in the lead-up to the race and that betting move proved to be spot-on as she showed an excellent turn-of-foot in the concluding stages.

Spanish Reef should taken plenty of benefit from that performance and she will be ever better over further as she gets deeper into her preparation.

Kings Will Dream made it three wins from as many starts in Australia with a comfortable win in the Goodwood Racecourse Handicap at Flemington this afternoon.

The imported galloper went into this race on the back of two wins at Warrnambool and Ballarat and he handled the step-up in class in impressive fashion.

Trainer Darren Weir believes that Kings Will Dream still has plenty of improvement left in front of him and is confident that he will have even more to offer next campaign.

Ken’s Dream returned to winning form with a fast-finishing effort in the Royal Ascot Handicap at Flemington this afternoon.

They didn’t go particularly quick in the early stages of the race and that set-up the contest for the horse with the superior turn-of-foot, which proved to be Ken’s Dream.

Trainer Darren Weir revealed after the race that Ken’s Dream will likely head to the 2018 Newmarket Handicap at Flemington next month.

Rimraam snuck up on the inside rail to record a narrow victory in The Vanity at Flemington this afternoon.

The Vanity always looked set to be a competitive affair and that proved to be the case as there were a host of winning chances inside the final 100 metres.

Damien Oliver timed his run to perfection on Rimraam and she finished over the top of her rivals late.

Grunt will go into the 2018 Australian Guineas as a leading contender after he recorded the biggest win of his career to date in the CS Hayes Stakes at Flemington this afternoon.

Cliff’s Edge took up the running at the 300 metre mark and he looked as though he would be tough to run down, but Grunt was outstanding in the final 100 metres and finished over the top of his rival.

Grunt has now recorded three wins on the trot and he will make his Group 1 debut in the 2018 Australian Guineas in a fortnight.

Redkirk Warrior stormed home in the final stages to record an outstanding victory in the 2018 Black Caviar Lightning Stakes at Flemington this afternoon.

It was Super Too that took up the running and Kerrin McEvoy on Redzel was happy to trail her into the race, while Redkirk Warrior was settled at the tail of the field.

Redzel looked the winner when he hit the front at the 250 metre mark, but Redkirk Warrior showed a staggering acceleration in the final stages to steal victory in the shadows of the post.