Chasing his 84th Group 1 win, Bossy got away well from the gates in the feature race on Saturday to sit second behind Banquo down the famous Flemington straight. With a slow pace set early on, Boss then found himself with plenty of horse underneath him at the 200m mark before exploding down the inside to win by two lengths.

Loving Gaby was the only challenge to Bivouac over the final furlong, but last year’s Manikato Stakes winner didn’t have the speed to keep up on the outside.

Boss, meanwhile, knew he was a chance at winning before the race was even run. 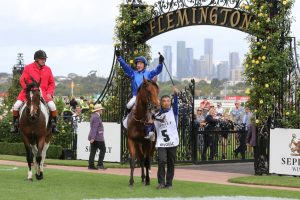 “It’s amazing when you get on these colts,” Boss said. “Just going to the barriers, I knew I was a winner, you can just tell when they’re on. He went down to the barriers like he really meant business, every stride he took he had his game face on.”

Bivouac became the sixth horse since 2008 to win the Newmarket through the Oakleigh Plate, a race he ran sixth in last month at Caulfield.

The colt by Exceed and Excel also became only the second three-year-old to win since 2015 after Sunlight won last year.

After winning on debut at Group 1 level in the Golden Rose (1400m) last September, Bivouac has now entered the conversation as one of Australia’s top sprinters.

Loving Gaby also lost no admirers on Saturday after being caught deep and remains an $11 chance in the TJ Smith.

The full market is available here.