Sydney trainer Grahame Begg is confident that Secret Admirer can break through for her first victory since last year’s Epsom Handicap (1600m) in the Group 1 Myer Classic (1600m) at Flemington today.

The Dubawi mare has been in consistent form during the Spring Racing Carnival and ran a gallant eleventh at her last start in the Caulfield Cup (2400m) a fortnight ago.

“She was ridden a bit too close for my liking in the Caulfield Cup and the ones around her punctured.” 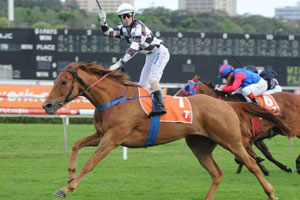 Secret Admirer is a leading contender in the Myer Classic. Photo by Steve Hart

Begg said the five-year-old recovered well after the Caulfield Cup and doesn’t believe the sharp drop back in distance of 800 metres will affect her.

“We think she’s freshened up nicely. We haven’t done a lot with her. We don’t normally work her hard either, just keep her work nice short and sharp.”

Secret Admirer has an excellent record over 1600m, with both of her Group 1 victories coming over the distance, and Begg is confident she can claim her third Group 1 victory if she receives a bit of luck.

“The race is perfect for her,” Begg said.

“She’s well in under the conditions and we think she looks better since she’s run in the Caulfield Cup.

“I just want a genuine gallop. She’s drawn well will probably be no worse than midfield.”

The Myer Classic will be Secret Admirer’s second race start at Flemington after she finished third behind Albert the Fat and King’s Rose in the Group 1 Emirates Stakes (1600m) last year.