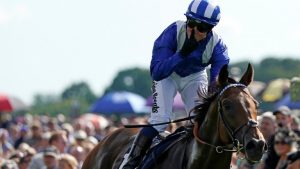 Battaash, above, is the odds on favourite for the 2020 King’s Stand Stakes at Royal Ascot. Getty Images

Battaash has been runner up in the King’s Stand Stakes in the last two runnings and will have to go into this year’s sprint down the Royal Ascot straight course without a lead up run.

British racing has only been back up and running for just over two weeks after being shut down from the middle of March because of the coronavirus pandemic.

Battaash had a lead up run in his previous two King’s Stand Stakes outings but Hills is not concerned about the six year old going into the race first up and said that the sprinter had a very good first up record.

“We would have probably run at Haydock if we’d had that race, but he’s gone well fresh over the years. He’s won first time in all four of his seasons, so it shouldn’t be a problem for him at all,” Hills told the Racing Post.

“It should be lovely ground at Ascot, all being well, and the draw looks okay, it’s better than the one last year.”

Hills is happy to forget Battaash’s last start fourteenth in the Group 1 EUR€350,000 Prix De L’Abbaye De Longchamp Longines (1000m) at Longchamp on October 6 last year after jumping from a wide barrier and rely on his good fresh record.

“It’s fair to put a line through his last run (in the Abbaye at Longchamp). The draw wasn’t ideal and it was desperate ground,” Hills said.

“It should be lovely ground at Ascot, all being well, and the draw looks okay, it’s better than the one last year.”

Battaash has drawn barrier ten in the eleven-horse King’s Stand Stakes field and will be ridden again by regular partner Jim Crowley.

Betting at Ladbrokes.com.au has Battaash as the $1.75 odds on favourite ahead of the Kevin Ryan trained Glass Slippers at $5.50 and John Quinn’s Liberty Beach at $8.50.