The Jeep Magic Millions 2yo Classic barrier drew has thrown new light onto the $2m 1200m scamper for the youngsters at the Gold Coast on Saturday.

Top Sydney trainer Clarry Conners would preferred to have drawn two or three gates out with $2.60 favourite Assail after the filly drew the coveted number one spot while Caulfield trainer Rick Hore-Lacy is saying that Conners’ filly is definitely the one to beat after his Clevadude drew near the outside at eighteen. 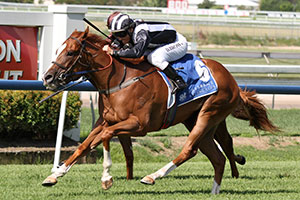 Missy Longstocking has drawn favourably in gate 5 for the Magic Millions 2yo Classic. Photo by: Daniel Costello

And Conners has leaned towards Queensland two year old Missy Longstocking as the hardest to beat after the Liam Birchley trained filly came up with the favourable gate of five, but will start from four with the scratching of the Gold Coast filly Purrific.

“I didn’t want to draw one because they go too hard and they will travel straight over and just deck her,” Conners said.

“There is not much of my little filly and they will be pushing and shoving and that’s a bit of a problem for me.

“I would love to be able to take a sit on her, but we have to work out how we ride her now.”

Conners thinks the Classic is a race in three and can see Missy Longstocking getting the best run from her good draw while Assail could be pressured if she tries to lead and Clevadude will have to work hard to get across in the early stages.

“There are three horses in the race: my filly, Clevadude and Liam Birchley’s filly, who is very honest,” Conners said.

“But I think after the barrier draw, Missy Longstocking will be very hard to beat.

“They always go mad in the Classic. She can put herself anywhere in the race and she just keeps winning, and you can’t knock winning.

“From the barrier, she should get back mid-field and come home strong and she just keeps taking another step up the ladder.”

BIrchley agrees with Conners that his filly will be right in the finish after keeping her unbeaten record intact with her last start win over Sweet Idea in the Group 3 $150,000 B J McLachlan Stakes (1200m) at Doomben on December 29.

“She has ticked most of the boxes so far. I’m really happy with her,” Birchley said.

“The only worry I have is the state of the track.

”Last year it was ridiculously biased. If you were not in the first two or three you couldn’t win.”

Birchley employed different tactics at Doomben and had Missy Longstocking ridden off the pace and will be instructing Damian Browne to use the same riding pattern.

“As long as the track’s fair I’m prepared to ride her the same way,” Birchley said.

Hore-Lacy was very disappointed coming up with such a wide gate with Clevadude who will start from barrier fourteen with the predicted scartching of the remaining emergencies and will have to think hard about what he wants Craig Newitt to do in the run to the first turn.

“It’s going to make it more difficult. My money would be on Clarry’s horse. I think at 6-4 in the old, she’s good value,” Hore –Lacy said.

“I was thinking we would win the race, but now I’m just going in hoping.”

Punters have stuck with Assail and the filly remains the favourite at $2.60 with Clevadude drifting slightly to $4 while Missy Longstocking is at $8 just in front of the other local chance Real Surreal at $9.