Alligator Blood passed the test at Flemington on Saturday winning a thrilling edition of the Group 3 CS Hayes Stakes (1400m), extending his unbeaten run to four.

The winning three-year-old had to dig deep in a small field of eight, but the favourite more than lived up to the hype as he held off the challenging Catalyst in an exciting sprint.

Alligator Blood was backed into $1.80 before the jump as punters came in droves for last month’s Magic Millions 3YO Guineas winner. Unlike at the Gold Coast, the gelding by All Too Hard had no problems getting to the track, but he did face a massive test against one of New Zealand’s finest sprinters.

With jockey Ryan Maloney retaining the ride, Alligator Blood got away well from the gates to lead from the inside. Catalyst matched the favourite early – but was happy to give up the lead before the pair rounded the bend. 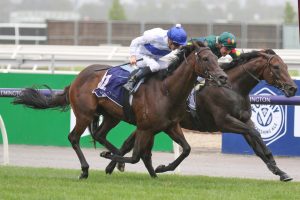 The odds have tightened on Alligator Blood ahead of this years Group 1 Australian Guineas. Photo Credit: Steve Hart.

“It feels like a Group 1. I can’t be more proud of this horse,” Maloney said after the race.

“We got away with some cheap sectionals, I was trying to pinch it from the 600m. I’ve got a lot of respect for that Catalyst, I know you can’t really get a guide on their form lines, but the times he’d been running and the manner he’d been doing it, I knew it was going to be a big test today.”

Maloney stuck to the fence down the straight as Alligator Blood let down at the 300m mark. Catalyst stuck with him but didn’t quite have the speed to run down Queensland’s most promising three-year-old.

“I was looking at the sectionals and I saw that they were going along and I thought, gee whiz he’s going to have to be good to win this and when Catalyst got to him I thought we’re going to run second,” winning trainer David Vandyke said.

“The time they ran in the final 400m was incredible and they were going stride for stride. When he just got to the edge that last 50m and showed his class, I thought wow, that’s his best performance.”

Alligator Blood will now head to the Group 1 Australian Guineas in a fortnights time before his grand final – the $3.5 million Golden Slipper – at Rosehill on March 21.

Not surprisingly, the bookies have acted accordingly by firming Alligator Blood from $4.00 into $3.20 favouritism for the Guineas.

Alligator Blood now hopes to become the seventh horse to complete the CS Hayes-Australian Guineas double, with Grunt being the last to do so in 2018.

As for the Slipper, Vandyke has no doubts the stable will head that way.

“Providing he pulls up well. I don’t think he’ll eat up tonight after that.”