Australasian Oaks The Long-Term Goal For The Vanity Winner Rimraam

Co-trainer David Hayes revealed that the Australasian Oaks will be the long-term goal for Rimraam after she returned to the races with a classy win in the 2018 The Vanity at Flemington this afternoon. 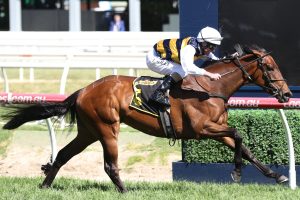 Aloisia hit the line strongly in an eye-catching run in the 2018 The Vanity. Photo by: Ultimate Racing Photos

The Vanity was always going to be a competitive race and that proved to the case as a host of different horses loomed as winning chances with 100 metres left to run.

Damien Oliver saved plenty of ground on Rimraam throughout The Vanity and that proved to be a winning move as she emerged from the pack in the concluding stages to claim victory.

Oliver was riding Rimraam for the first time, but he said after the race that he was impressed with the feel that The Vanity winner gave him and he believes that she is in for a big preparation.

“We had a beautiful run and the gaps came at the right time,” Oliver said.

“She was really strong to the line.

“It is only a short turnaround from the Spring to the Autumn and she has progressed nicely.

“I think that she is in for a good preparation.

“She has shown she can run a trip and she has a good bit of scope about her.

“It is always nice to see staying types of horses sprint well fresh.”

Rimraam finished a credible seventh in the Kennedy Oaks during the 2017 Spring Racing Carnival, but Hayes revealed that she didn’t really handle the trip and he is keen to keep her at 2000 metres for races like the Vinery Stud Stakes and the Australasian Oaks this campaign.

“She got a great ride from Ollie,” Hayes said.

“She was a filly that was knocking on the door in the Group races during the Spring and it is just great that she is now a major Group winner.

“She didn’t stay in the Spring and we will probably restrict her – she can still run in an Oaks, but it will probably be the Australasian Oaks over in Adelaide.

Thousand Guineas winner Aloisia was a big drifter in the lead-up to The Vanity and she got a long way back, but hit the line strongly in a performance that suggests she is in for a strong Autumn campaign.