The 2018 Apollo Stakes Day results will be available all afternoon at horseracing.com.au and we are excited for another massive day of racing at Royal Randwick. 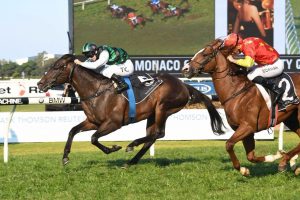 Addictive Nature will start the 2018 Apollo Stakes as a narrow favourite. Photo by: Steve Hart

There is no Winx in the Apollo Stakes field this year, but it is still a very interesting betting race and will prove a key form reference for the rest of the 2018 Sydney Autumn Racing Carnival.

There are a host of other big races on the 2018 Apollo Stakes Day card and the Pierro Plate, Southern Cross Stakes, Triscay Stakes and Light Fingers Stakes are all set to be fascinating betting races.

Mate Story led from start to finish to record a tough win in the Highway Handicap at Royal Randwick this afternoon.

There was no love for Mate Story with punters ahead of the Highway Handicap and he drifted from $1.80 out to $3.50, but he was always in control of the race.

Jean Van Overmeire took him straight to the front in the early stages and he quickly put away his rivals when he was asked for an extra effort.

Santos was most impressive in the 2018 Pierro Plate. Photo by: Steve Hart

Santos stamped himself as a genuine Golden Slipper contender with an impressive win in he 2018 Pierro Plate at Royal Randwick this afternoon.

Santos did plenty wrong in the run and Tim Clark struggled to get him to settle, but he was still able to savage the line when asked for an extra effort.

Legend Of Condor started the Pierro Plate as a clear favourite, but he was one of the first horses beaten.

The judge could not seperate Emperor’s Way and Almost Court in the Fairfar & Roberts Jewellers Handicap at Royal Randwick this afternoon.

Almost Court kicked clear at the top of the straight and looked as though he had stolen the race when Emperor’s Way was held-up for a run.

Emperor’s Way eventually found clear running and savaged the line in the final 100 metres before he hit the line along with Almost Court.

The judge took an eternity to make a decision and in the end he couldn’t split the pair as a deadheat was declared.

Kaepernick returned to winning form with a smart performance in the Southern Cross Stakes at Royal Randwick this afternoon.

It was Deploy that started the Southern Cross Stakes as a clear favourite, but he was one of the first horses beaten and it was Kaepernick that showed an electric turn-of-foot when asked for an extra effort.

Dothraki loomed as the danger on the inside, but punters who backed Kaepernick never had any worries and he saluted at the juicy price of $7.50.

Quick Defence upstaged his rivals to score an upset win in the 2018 Derucci Handicap at Royal Randwick this afternoon.

Malaise and The Pinnacle cleared out from the rest of the field at the top of the straight and looked like they would fight out the finish, but Quick Defence emerged from the pack in the concluding stages.

The win was  just Quick Defence’s fourth from his 32 race starts.

Endless Drama recorded a maiden win in Australia to take out the 2018 Apollo Stakes at Royal Randwick this afternoon.

It was Global Glamour that press forward to take up the running from Addictive Nature in the early stages of the Apollo Stakes and she proved tough to run down in the straight.

Global Glamour refused to go away and Comin’ Through and Prized Icon flew home late, but it was Endless Drama that hit the front at the right time to claim victory.

Faraway Town made it two wins on the trot in the Triscay Stakes. Photo by: Steve Hart

Faraway Town claimed back-to-back wins for the first time in her career with an excellent win in the 2018 Triscay Stakes at Royal Randwick this afternoon.

Zestful flew home in the concluding stages of the Triscay Stakes, but she was set too much of a task and Faraway Town was able to hold-on to record back-to-back wins.

Trainer Matthew Smith has been delighted with Faraway Town this preparation and she will now head to the Guy Walter Stakes in a fortnight.

Alizee returned to the races with a classy victory in the 2018 Light Fingers Stakes at Royal Randwick this afternoon.

There were a few nervous moments for punters that backed the favourite, as Alizee was blocked for a run at the top of the straight, but she eventually found clear running and she savaged the line in the final stages of the race.

Trainer James Cummings was delighted to see the Flight Stakes winner make a winning return to the races and he is hopeful that she is in for a big campaign.