The David Vandyke-trained Alligator Blood may have come up with gate 11 at Tuesday morning’s barrier draw for the $2 million Gold Coast Magic Millions 3YO Guineas (1400m) but the star galloper remains odds-on to win this weekend. 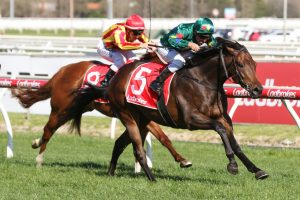 A capacity field of in-form three-year-olds will do battle in the Magic Millions 3YO Guineas 2020 this Saturday as part of the Gold Coast’s $10 million Magic Millions Day including the spring’s Caulfield Guineas runner-up Alligator Blood.

His second to Super Seth in that $2 million, Ladbrokes-sponsored mile classic was also his sole loss to date with the son of All Too Hard having won all seven other career starts so far.

That includes three-from-three over the 1400m distance of the Magic Millions Guineas as well as both the gelding’s lead-up runs in Queensland this summer in emphatic fashion.

First-up Alligator Blood won the Listed Gold Edition Plate (1200m) by two and a quarter-lengths before his two-length success back at Eagle Farm on December 28 in the Group 3 Vo Rogue Plate (1400m).

Both wins came from barrier five and so the only query for Alligator Blood and hoop Ryan Maloney this weekend is the double-digit draw for the Magic Millions Guineas.

Barrier 11 was the gate that got the better of the youngster in the Caulfield Guineas last October, but Saturday’s favourite will come into eight if all the emergencies fail to gain a start.

The bookies obviously do not see the barrier as an issue with Alligator Blood retaining his $1.80 quote in the latest Magic Millions 3YO Guineas betting markets post-draw at Ladbrokes.com.au.

Showing just how heavy a favourite Alligator Blood is to win the $2 million set weights plus penalties clash is the fact that the next best in betting are quoted at $13.

The Mark Newnham-trained Wyong Magic Millions 3YO & 4YO Stakes winner Diamond Thunder and lightly raced filly from Victoria It’s Kind Of Magic are considered the “dangers” in what is an open rest of the market.

Diamond Thunder suffered a blow at the Magic Millions 3YO Guineas barrier event drawing the second outside gate (20) ahead of his bid at closing the three-length gap that separated him in fourth behind Alligator Blood in the Vo Rogue Plate.

It’s Kind Of Magic drew better in barrier six with Brett Prebble booked to ride the Brent Stanely-trained daughter of So You Think who comes off a lead-up win at The Valley over 1200m on December 28.

There she carted 58.5kg to victory giving her a nice advantage back to 54kg this weekend from the good gate.

Adding to the strong interstate presence looking to stop the reign of the star local in this year’s Magic Millions 3YO Guineas are the likes of well-travelled Group 1 performer Dubious (10) who carries the 58kg topweight for Ciaron Maher & David Eustace and last year’s Magic Millions 2YO Classic winning filly Exhilarates.

Exhilarates is a $17 chance in the latest Magic Millions 3YO Guineas odds at Ladbrokes.com.au for Godolphin and will be ridden by Kerrin McEvoy as the daughter of Snitzel looks to improve on her first-up fifth in the Listed Gosford Guineas (1200m).

Peter & Paul Snowden saddle-up four in the $2 million Magic Millions 2YO Classic (1200m) on the card including the narrow favourite Aim, with the stable also accepting for both Gosford Guineas winner Hightail and Leviathan in the Magic Millions 3YO Guineas.

Hightail drew well in barrier five, while last start Randwick winner over the 1400m Leviathan has work to do from gate 14.

Anthony Freedman’s recent Flemington winner King Of Hastings (7), Brisbane-trained Vo Rogue Plate runner-up Profit (15) and the rails-drawn Superium (1) are among the other three-year-olds likely fighting for second to Alligator Blood in the event.