Alligator Blood cruises to victory in 2020 Magic Millions 3yo Guineas 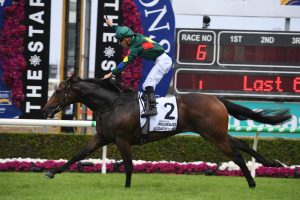 Alligator Blood, above, winning the 2020 Magic Millions 3yo Guineas at the Gold Coast. Photo by Steve Hart.

Alligator Blood brushed aside a late arrival to the track because of a nasty accident that temporarily closed the M1 which caused several horses, including Alligator Blood, to be delayed arriving at the Gold Coast course.

Trainer David Vandyke gave Alligator Blood the all clear to take his place in the $2m race for the three year olds and the gelding lived up to his tag as the $1.80 favourite with a dominant win over his rivals.

“He was tucked up in the yard and I thought he wasn’t looking his best, but these good horses jump the hurdles and the Queenslander did it style,” Vandyke said.

“He was going to run. He wanted to run. I wasn’t happy with him but I wanted to give him the opportunity to do what he does best, to get out there and compete.”

“He is just a deadset competitor and he has done his state and his owners proud.”

“He got beat in the (Caulfield) Guineas and see him career away and win a $2m race like that is a big relief.”

Winning jockey Ryan Maloney gave Alligator Blood a peach of a ride and the odds on favourite was never in any doubt at any stage of the race.

“He rode him a treat. He had right where he should have, gave him plenty of room in the straight and the horse did the rest,” Vandyke said.

Ryan settled Alligator Blood in sixth and seventh position before peeling him out four wide on the home for a clear run to the line.

The start of the Magic Millions 3yo Guineas was further delayed when Scout had to be re-shod behind the barriers after losing a plate on the way to the barriers and then the Peter and Paul Snowden trained Leviathan broke through the front of the starting gates delaying the start further until he could be caught and declared a late scratching.