Two of the top five chances in Thousand Guineas betting come from Adelaide with a strong win from Maybe Discreet in the Group 2 Edward Manifold Stakes (1610m) on Saturday rocketing her into contention. 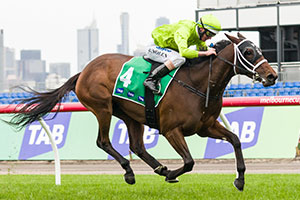 The Phillip Stokes-trained youngster moved to $9.00 in the Thousand Guineas market with fellow Adelaide youngster Molto Bene ($5.00) the second favourite behind Norzita ($4.50).

Maybe Discreet overcame a wide barrier draw to score a second straight stakes win on Saturday after showing strong signs at the distance in her previous start when winning the Listed Morphetville Guineas (1600m) by three lengths.

Jockey Luke Nolen gave the daughter of Shamardal a glowing report following Saturday’s victory and suggested she will be a strong chance in Wednesday week’s Thousand Guineas.

“She showed good determination to fight them off at the furlong and probably got a little bit lost. All in all I thought the effort was really good,” Nolen said.

“I think she’ll be really suited at Caulfield.”

The Thousand Guineas Prelude was the final lead-up event for the Will Clarken-trained filly who will be ridden by Craig Williams in what is her major spring target.

Clarken told horseracing.com.au last month that Molto Bene was enjoying her time in Melbourne and had impressed her star jockey.

“I wasn’t really sure how she’d handle it but she’s settled into Melbourne really well,” Clarken said.

“Craig’s been really pleased with her work.”

Molto Bene first announced herself as a Thousand Guineas contender in April when coming from the back of the field to win the SA Sires’ Produce Stakes (1400m) at Morphetville by three lengths.

Other fillies at the top end of the Thousand Guineas betting market include Love For Ransom ($6.00) and Commanding Jewel ($9.00).