The Actuary Wins 2020 The Phoenix For Gollan

The Actuary looks set for a potential Sydney raid during the spring after the gun young filly handed trainer Tony Gollan one hundred and a half metro wins for the season to date with success in Doomben’s The Phoenix on Saturday. 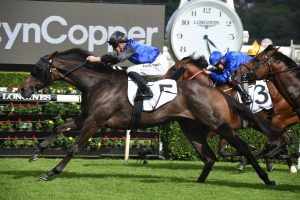 A nicely-bred daughter of Sebring, The Actuary was one of ten two-year-olds engaged in this season’s Listed $125,000 The Phoenix (1615m) that was won last year by subsequent Spring Champion Stakes (2019) and Randwick Guineas (2020) winner Shadow Hero.

The first The Phoenix winning filly since Fontelina in 2011, The Actuary was given a beautiful ride by apprentice Baylee Nothdurft who continued his successful association on the up-and-comer.

Nothdurft partnered The Actuary for her breakthrough win on June 3 in a maiden over 1350m at Doomben and the duo went back-to-back on the track as she went up in both class and distance for Saturday’s feature race in Brisbane.

Having her first run on Heavy going, the chestnut handled the ground without a worry settling in the second half of the field that was led around by Spicy Restaurant.

Once on the straight, a still green-looking The Actuary donning the blinkers came with a weaving run, getting to the front inside the final furlong before letting down with a brilliant late turn of foot.

On the line The Actuary ($4.80) had one and a quarter-lengths to spare over the Ciaron Maher & David Eustace-trained Fastnet Rock colt Toscanini ($10) who, off a three-wide run throughout, failed to break his maiden status at start number seven.

In a photo for third to round off The Phoenix trifecta was the Paul Messara-trained one-time favourite Outburst ($4.80) who also raced wide the entire trip.

In a tight finish only two length separated the first six past the post with the untapped Desleigh Forster-trained See Marie improving form last to finish a close fourth ahead of the beaten $4 favourite Cosmic Gossip (5th) and early frontrunner Spicy Restaurant (6th).

Gollan was suitably thrilled with The Phoenix result and tipped The Actuary as a serious filly for the future.

“Fantastic to get a stakes win with this filly, she’s very well bred we wanted to knock over some Black Type for her as a two-year-old and very satisfying to reward the owners who pour a lot of money into out yearlings,” he said after the race.

“One hundred winners for the season is a great milestone one that should be celebrated by all our staff from foreman Craig Cavanough down everyone does their bit to make our big team work and hopefully we can notch up a few more.

“A huge thanks to all our riders as well, Baylee (Nothdurft) today was exceptional I wasn’t sure where he was going to go at the top of the straight there but he knew what he was doing.

“When we brought her back we were always aiming at this race, very comfortable to tip her out now and bring her back next campaign as a three-year-old.”