Ace High produced an incredibly tough performance to claim a maiden Group win in the 2017 Spring Champion Stakes at Royal Randwick this afternoon. 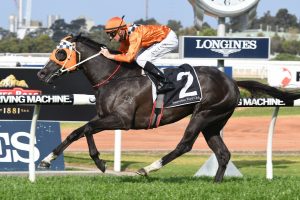 Tye Angland went straight to the lead on Ace High in the Spring Champion Stakes and the leading hoop was determined to turn the Group 1 event into a genuine staying contest.

Ace High quickly fought off Coral Coast at the top of the straight, but was in for a fight when Tangled stormed from the pack at the 250 metre mark.

Tangled had every possible chance to finish over the top of Ace High, but the tough three-year-old would not left his rival past him and he was brave to the line to claim the Spring Champion Stakes.

An emotional Angland paid tribute to the toughness of Ace High in the Spring Champion Stakes and he revealed that he missed his brothers wedding to take the ride in the Group 1 event.

“We went forward again today and we thought there was going to be a bit more pressure,” Angland said.

“He just had a beautiful run in front and I thought that I would make it a bit of a staying test.

“I was on empty late, but hopefully it was the sectionals that I got right early that were paying dividends.

“I missed my brother’s wedding today for this fellow.”

The Spring Champion Stakes win of Ace High was David Payne’s first Group 1 victory since Criterion won the 2014 Australian Derby and he was thrilled to claim his 117th win at the highest level.

Payne confirmed that Ace High will press on to the Victoria Derby and he believes that he will be even better when he is able to take a sit over a proper staying distance.

“I think he is going to be a better horse when we can follow something, but today we had to make it a stayers race,” Payne said.

“He is definitely a Derby horse and that is when you can give him a bit of a breather.

“I had Criterion there and he is the best stayer.

“I don’t know if he is better than Criterion, but he is a good stayer and Criterion was more brilliant.

“We always loved him and he always showed plenty of ability.”

Tangled was gallant in defeat in the Spring Champion Stakes, while Sully made up plenty of ground late to round out the placings.