Ace High outstayed his rivals to record a most impressive win in the 2017 Victoria Derby at Flemington this afternoon. 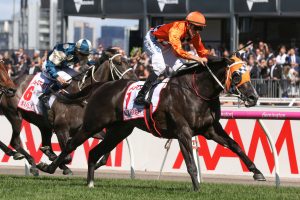 Ace High was far too good for his rivals in the 2017 Victoria Derby at Flemington this afternoon. Photo by: Ultimate Racing Photos

Ace High led from start to finish to win both the Dulcify Quality and the Spring Champion Stakes in Sydney, but trainer David Payne was adamant that he would be better when ridden off the speed and that proved to be the case.

Jockey Tye Angland settled Ace High in the middle of the Victoria Derby field, but he was keen to avoid being boxed in on the fence and he ended up being posted three and four wide throughout the race.

That didn’t bother Ace High as he travelled into the race beautifully and he always looked like the winner at the top of the straight.

It took him a while to fully wind-up, but he was able to finish over the top of both Sully and Weather With You to record one of the more impressive Victoria Derby wins in recent memory.

The Victoria Derby victory of Ace High was Tye Angland’s first ever winner in Melbourne, but Angland was quick to pay credit to the staying performance of the talented three-year-old.

“It is a big thrill,” Angland said.

“During the run I was thinking that I was in trouble where I was.

“I drew gate three and I said how well that he relaxes, but when they took off it fired my horse up and I couldn’t hold him in behind them anymore.

“I just had to count, wait and let him roll into it and just try to hold onto to him to get the trip, but he could do it again.

“Credit to the whole team at Rosehill, they have done a great job with him and I am just the lucky one that gets to see on him raceday.”

David Payne has always had the goal to win the Victoria Derby and he was clearly delighted to have finally won one of the most historic races on the Australian racing calendar.

“It has taken me a while,” Payne said.

“It is not usual when a plan comes together, but this one really has.

“Everything just feel into place.

“I was a bit worried when I saw that he was three or four deep, but I always wanted to ride him back and he is a better horse ridden quietly.

“Let’s hope he is back here on the first Tuesday of November next year and that is another one that I would really love to win.”

Sully held-on to finish second, while Godolphin-trained Astoria rounded out the placings in third.