The 2017 Melbourne Cup first acceptances have been released and there are 55 horses left in contention for ‘the race that stops a nation’. 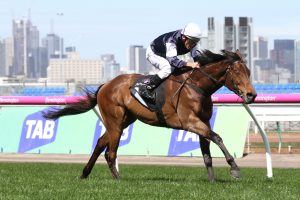 Almandin failed to fire in the Group 3 The Bart Cummings (2500m) at Flemington last weekend, but he remains on track to defend his title in the Melbourne Cup and he was included in the third acceptances that were released this afternoon.

The imported stayer remains a clear favourite in the 2017 Melbourne Cup betting market with Ladbrokes and he is currently available at Melbourne Cup odds of $8.

The Macedon Lodge team of Lloyd Williams is set to have a typically strong and in the Melbourne Cup and he has also included Sir Isaac Newton, Bondi Beach, Gallante, Assign, Aloft, Foundry and Amralah in the first acceptances.

Another trainer that is set to have a strong hand in the 2017 Melbourne Cup is Darren Weir, who famously won the race with Prince Of Penzance back in 2015.

Internationals have made up the majority of the Melbourne Cup field in recent years and that is set to be the case once again in 2017.

Godolphin trainer Charlie Appelby dominated the lead-up events to the Melbourne Cup last year and he has returned to Australia with a strong team that includes Queen Elizabeth Stakes winner Francis Of Assisi, the tough Qewy and Australian debutant Kidmenever.

Melbourne Cup winning trainer Andreas Wohler has Red Cardinal in the Melbourne Cup first acceptances, while the Coolmore team in Ireland could be represented by Rekindling, Johannes Vermeer and US Army Ranger.

Max Dynamite and Wicklow Brave could return for another tilt at the Melbourne Cup, while Thomas Hobson has been included in the following his win in the Ascot Stakes at Royal Ascot earlier in the year.