The Ciaron Maher & David Eustace-trained Cox Plate hero Sir Dragonet posted his first win since last October relishing the inside alley and a quick back-up in the Tancred Stakes 2021 results. 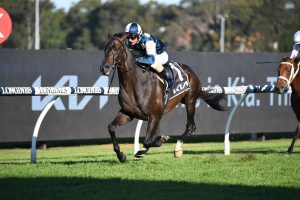 He franked that form, coasting throughout the 2400m weight-for-age event thanks to a gun ride from barrier one with now 90-time Group 1 winning hoop Glen Boss in the saddle.

“It’s good to get him back to his best form,” co-trainer Maher told Sky Thoroughbred Central.

“He put the writing on the wall last week and I guess the back-up was the only little query, but he was super and Glen rode him very confidently.

“He’s taken a fair bit of work…so great to get him back into form.”

Boss got Sir Dragonet to settle and relax nicely just off the front pack in a lovely position throughout before turning beautifully and making his move on the straight.

In the end, last year’s Ladbrokes Cox Plate champ was far too good for his rivals running away with a nearly three length victory in the Tancred Stakes over the eye-catching Bjorn Baker-trained mare She’s Ideel.

Running an excellent Sydney Cup trial in third was then Danny O’Brien‘s former VRC Oaks winner Miami Bound who would be hard to beat next-up over the two miles should she get a wet track on Day 2 of ‘The Championships’.

Sir Dragonet also now targets another elite level race on April 17 at Royal Randwick, the entire heading towards the $4 million Group 1 Queen Elizabeth Stakes (2000m) back down in distance.

It is shaping-up as a Queen Elizabeth Stakes for the ages with last year’s quinella of Addeybb and Verry Elleegant the ones to beat.

Those two horses also ran one-two in the 2020 Ranvet Stakes, and repeated the feat in 2021 with Verry Elleegant turning the tables on the William Haggas-trained European.

They renew their rivalry in the Queen Elizabeth Stakes again this autumn and now Sir Dragonet will join them in a brilliant line-up for the lucrative showdown.

All-in Queen Elizabeth Stakes betting at Ladbrokes.com.au is led by Addeybb ($2.90) and Verry Elleegant ($3), while Sir Dragonet has now firmed in from $15 to $13.