The Group 1 Queen Elizabeth Stakes lived up to the hype on Day Two of The Championships on Saturday as Addeybb leveled up the score with Verry Elleegant to defend his crown in the $4 million feature.

After the pair eyeballed each other only three weeks ago to run first and second respectively in the Ranvet Stakes, punters were a little shocked to watch Tom Marquand settle back nice and early while James McDonald and Verry Elleegant rolled forward.

In the end, the decision proved to be a wise one as Marquand pushed the button coming out of the turn to fight all the way to the finish and win by half a length. 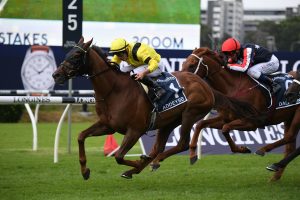 Addeybb has now won six of his seven starts second-up from a spell after defending his crown in Saturday’s Queen Elizabeth Stakes at Royal Randwick. Photo Steve Hart.

Some very interesting tactics set the tone for a superb finish as Dalasan crossed the pack to lead, while Rosehill Guineas winner Mo’unga settled second.

Like her days of old, Verry Elleegant over-raced a little in the early stages and at one point found herself shuffling back to second-last before rounding the pack into the home turn.

As for Addeybb, the blinkers going on proved the trick as the sensational stayer went on to add a fourth Group 1 to his resume.

“He’s obviously run in the winkers for a long time, and it’s sort of a natural progression that just gives him that extra one-percent that he might have needed. I don’t think he needed it, but you never know.”

At one point it looked as though Verry Elegant had Addeybb beat at the top of the straight, but with a run under his belt, the added fitness helped the international raider going the likes of Grand Armee and Integrate as a two-time winner.

Dalasan capped off a very brave run to hold on for third, while Think It Over came clear late to run fourth with Sir Dragonet failing to make up ground from well back.